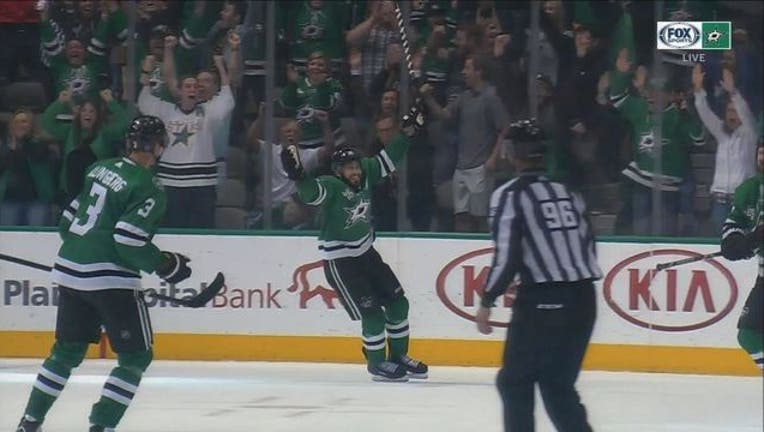 DALLAS (AP) - Jamie Benn scored 3:04 into overtime and the Dallas Stars rallied to beat the St. Louis Blues 3-2 on Saturday.

Benn's winner from the high slot came after Alexander Radulov pulled Dallas even with 2:56 remaining in regulation when he chipped in a pass from Tyler Seguin after a shot from Benn went over net and caromed off the end boards.

The Stars thought they had gone ahead 35 seconds later when the puck slid past Carter Hutton from a pile in front of him, but the goal was overturned when replay determined the shot went in off Devin Shore's skate.

The Blues took a 2-1 lead with less than eight minutes remaining when Jaden Schwartz skated full speed past Antoine Roussel as the Dallas forward came off the bench on a line change and beat Ben Bishop, who stopped 35 shots.

St. Louis lost for the eighth time in nine games, and the Stars strengthened their hold on the top wild-card spot in the tight Western Conference playoff race. Dallas won the season series 3-2, with the home team winning each time.

Tyler Pitlick scored the game's first goal when he took a pass from Roussel while alone at the blue line, skated in and beat Hutton easily on the stick side seven minutes into the second period.

Hutton had 31 saves after stopping 35 of 36 in a win over Detroit that stopped a season-high seven-game losing streak.

The Blues got even when Ivan Barbashev tapped a rebound into an open net on Vince Dunn's shot off Bishop's pads. Vladimir Tarasenko had his 30th assist on the goal.

The first period was scoreless despite the teams spending six of the first seven minutes on special teams.

It started with St. Louis on a power play when Chris Thorburn and Roussel dropped the gloves 11 seconds into the game. Both were given five-minute fighting penalties and 10-minute misconducts, and Roussel got an instigating penalty that gave the Blues the man advantage.

Near the end of the penalty, Esa Lindell was called for delay of game, but the Blues failed to convert again. The stretch wrapped up with a 4-on-4 after a slashing call against St. Louis' Patrick Berglund and an interference penalty on Brett Ritchie.

NOTES: St. Louis F Scottie Upshall and D Jay Bouwmeester left with lower-body injuries and didn't return. ... Brett Hull, who scored the Stanley Cup-winning goal for Dallas in 1999, did the ceremonial puck drop. The Stars are celebrating 25 years in Dallas this season.