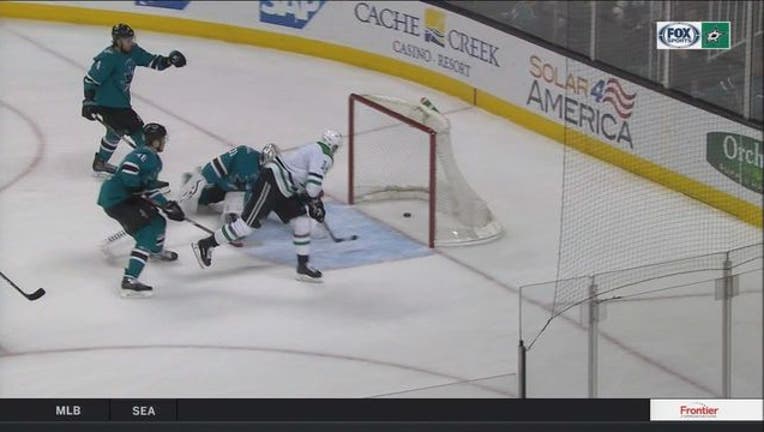 SAN JOSE, Calif. (AP) - Calling it "a lucky play," Jamie Benn stole the puck from Tomas Hertl and scored the go-ahead goal with 3:06 left before tacking on an empty-netter for the hat trick in the Dallas Stars' 4-2 victory over the San Jose Sharks on Tuesday night.

So will the Stars, who ended a seven-game road losing streak.

Mike McKenna, who replaced an injured Kari Lehtonen, got the victory after stopping all 17 shots he faced. McKenna last played in the NHL for the Arizona Coyotes on Feb. 16, 2015.

"It's fulfilling getting a win," McKenna said. "It was fun to be part of this win. It's not anything I haven't seen before. Sometimes you lean on your experience."

Dallas' Gemel Smith tied it at 2 with 5:17 left. Devon Shore won a battle along the boards and rushed the net, tapping it to Smith at the last second.

Logan Couture set a career high with his 33rd goal and Timo Meier scored No. 20 for the Sharks, who lost their fourth straight.

"You're concerned any time you lose a lead," Sharks coach Peter DeBoer said. "Again, we played good enough tonight to score four goals and we should have won. We didn't, and we didn't handle that as well as we could have in the third. For me, the big mistake was not putting them away when we had the chance, not the third period."

Lehtonen left with an upper-body injury with 4:06 remaining in the first period. He took a puck to the facemask. Hitchcock said he should be OK for Friday's game in Los Angeles. Lehtonen saved 12 of 14 shots.

Couture put the Sharks ahead 1-0 when he got a pass from Brent Burns and fired it into the net from long range midway through the first period.

Meier added to the lead six minutes later after chasing down a puck that had bounced off Lehtonen's pads. He fired from the right side, finding a hole under Lehtonen's glove.

"You don't want to be on your heels," Meier said. "We were on our heels and you can't do that late in the season. A thing like that can't happen again."

Benn made it 2-1 late in the second period, redirecting a centering pass from John Klingberg off Martin Jones' shoulder pad and into the net.

NOTES: Benn has points in 10 of his last 13 games. ... Stars C Tyler Seguin has points in each of his past four games and six of seven overall. ... Sharks F Evander Kane missed the game with an apparent arm injury suffered at Las Vegas on Saturday night. ... Sharks C Dylan Gambrell made his NHL debut. ... The Sharks signed Sasha Chmelevski to a contract and assigned him to the AHL Barracudas.

Stars: Play at the Anaheim Ducks on Friday.