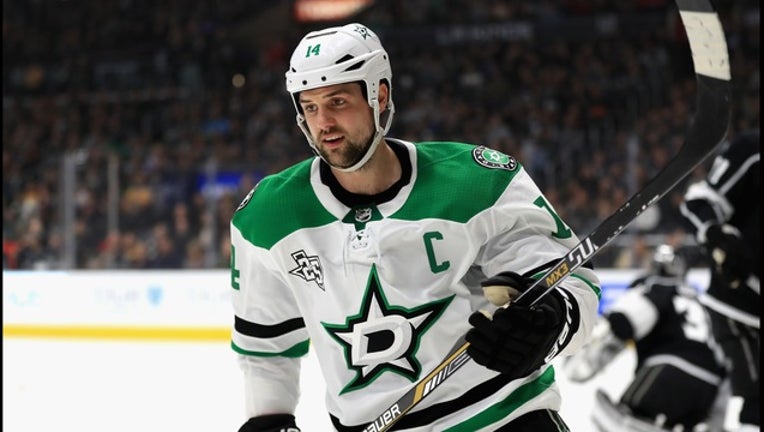 Jamie Benn #14 of the Dallas Stars looks on after scoring a goal during the first period of a game against the Los Angeles Kings at Staples Center on April 7, 2018 in Los Angeles, California. (Photo by Sean M. Haffey/Getty Images)

LOS ANGELES (AP) - Jamie Benn had a natural hat trick in the first period and the Dallas Stars defeated the Los Angeles Kings 4-2 on Saturday night.

It was Benn's second hat trick in three games and the fourth of his career. Benn has seven goals during a three-game scoring streak.

Kari Lehtonen made 34 saves in his 445th and potential last game for the Stars before becoming a free agent this summer. Devin Shore also scored, and Alexander Radulov had three assists.

Alec Martinez scored twice and Jonathan Quick made 14 saves for the Kings, who will play Vegas in the first round of the playoffs after finishing as the first wild-card team from the Western Conference.

Benn made it 2-0 at 8:40, knocking the puck out of mid-air by swinging his stick like a baseball bat from close range and extending his scoring streak to three games.

Benn scored his second of the game at 11:35 to put the Stars up 3-0. Benn tapped the puck into an open net after defenseman Oscar Fantenberg lost the puck in his own zone.

Benn got his hat trick at 13:57 by tipping Radulov's pass past Quick for his 10th point during a five-game point streak. He has eight goals and two assists in that span.

The Stars took a 1-0 lead at 6:41. Shore scored on a backhand after poking the puck away from Kings defenseman Christian Folin. It was Shore's 11th goal, and his third point (two goals, one assist) in five games.

Martinez scored on a slap shot at 3:42 in the second, getting the Kings on the board. He cut the deficit to 4-2 at 12:27 on a one-timer from Michael Amadio after a power play expired.

Stars: End of regular season. Did not qualify for playoffs.

Kings: Visit the Golden Knights to start the first round.