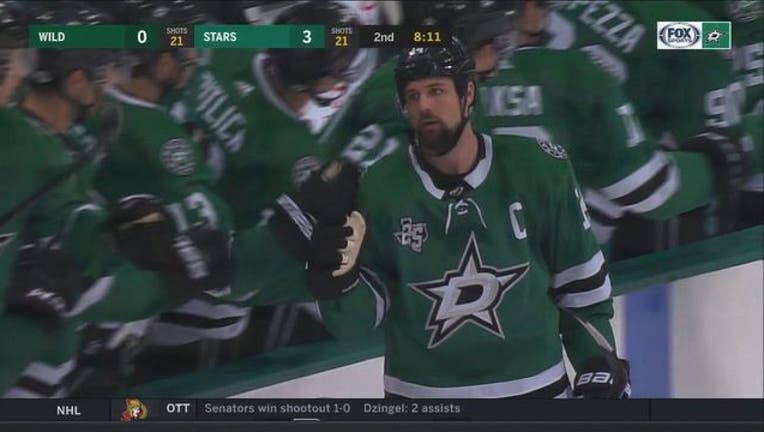 DALLAS (AP) - Jamie Benn had a goal and an assist during a four-goal second period, and the Dallas Stars beat the Minnesota Wild 6-1 Saturday night.

Mattias Janmark and Benn scored on the power play, Tyler Seguin scored on an assist from Benn, and Stephen Johns added an unassisted goal during the second-period flurry. Alexander Radulov and Dan Hamhuis scored in the third period for the Stars, Seguin also had two assists, and Kari Lehtonen stopped 30 shots to win his fourth straight.

Jason Zucker spoiled Lehtonen's shutout bid at 5:40 of the third period. Alex Stalock stopped 25 of the 29 shots he faced through the first two periods, and Devan Dubnyk gave up two goals on nine shots in the third.

In an evenly played first period, neither team had a goal or a penalty as the Wild outshot the Stars 10-9.

That all changed midway through the second period, when Minnesota drew the first two penalties and Dallas scored on both power plays sandwiched around the goal by Johns in a span of 4:08.

Zucker went off for high sticking at 7:41 and Janmark deflected John Klingberg's shot from the blue line past Stalock at 8:59.

Johns stole the puck in the neutral zone, skated in to the right faceoff circle and sent the puck just inside the right goalpost just 48 seconds later.

Dallas swarmed Minnesota's net on the second power play. Devin Shore's backhand from just to the left of the goal rebounded to Benn on the right for an easy goal at 11:49.

Seguin increased the Stars' sudden lead to 4-0, taking a pass from Benn low in the left circle for Seguin's team-leading 25th goal.

NOTES: The Stars' No. 1 goalie, Ben Bishop, was scratched after being hit in the face by a puck while sitting on the bench during Thursday's game at Arizona. Rookie Landon Bow was recalled from Texas of the AHL to back up Lehtonen. ... Commemorating 25 years in Dallas since moving from Minnesota, the Stars had four players from the 1993-94 team - Paul Cavallini, Russ Courtnall, Dave Gagner and Craig Ludwig - drop ceremonial first pucks. ... Stars LW Antoine Roussel returned after missing two games because of a nasal infection. ... Minnesota was playing back-to-back nights after a 5-2 home win over Vegas on Friday. ... The Wild came in with a seven-game streak of scoring on the power play, during which they had eight goals. At the other end, they have allowed seven goals in their last 12 penalty-killing attempts over the last five games.