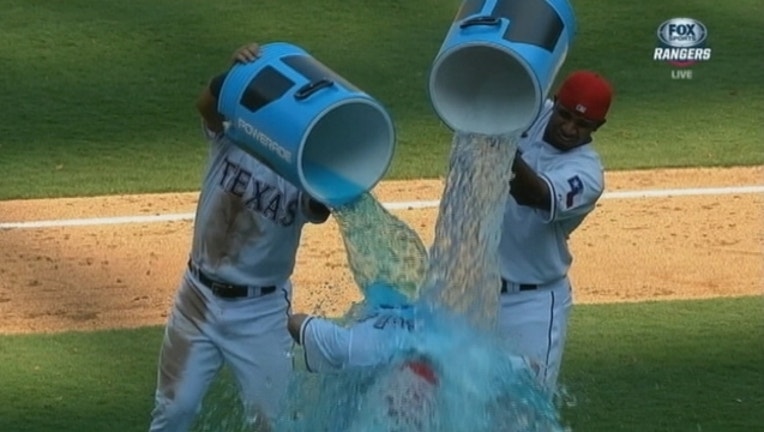 The Rangers swept the three-game series and have won four straight games and seven in a row at home.

Beltre broke a 3-3 tie in the third inning with a solo shot. In the next inning, Strausborger hit his first major league homer in his third game.

Smyly (0-2) allowed five runs in four innings. He was making his first start since he went on the disabled list with a torn labrum in his shoulder in May.

Yovani Gallardo (9-9) gave up three runs in the first two innings but blanked the Rays over the next 3 1-3 for his second straight win. He allowed 11 hits and a walk and struck out one.

Shawn Tolleson pitched a scoreless ninth inning for his 23rd save in 24 chances.

Sam Freeman relieved Gallardo with one out and a runner at second base in the sixth and retired both batters he faced.

The Rays' Kevin Kiermaier had three hits, including a run-scoring double in the second, and stole a base.

Tampa Bay took a 1-0 lead in the first inning when Grady Sizemore doubled and scored on James Loney's single.

The Rangers struck for two runs in the bottom of the first. Delino DeShields led off with a walk, stole second base and scored on a double by Shin-Soo Choo. Two fly-ball outs sent Choo home.

Desmond Jennings led off the second with a triple. Kiermaier doubled down the left field line to drive in Jennings and scored himself on John Jaso's single.

In the bottom of the second, DeShields blooped a single into left to drive home Bobby Wilson and tie the game 3-3.

Texas regained the lead in the third on Beltre's second homer in two games.

Rangers: LHP Derek Holland (strained shoulder) threw Sunday and could be ready to come off the DL for the first time since April 11.

Rangers: LHP Cole Hamels (6-8, 3.86) missed a start Thursday because of a sore left groin but has been cleared for the opener of a three-game set vs. Seattle on Monday. Hamels' most recent start was a 4-3 loss on Aug. 7, when three Mariners hit home runs.