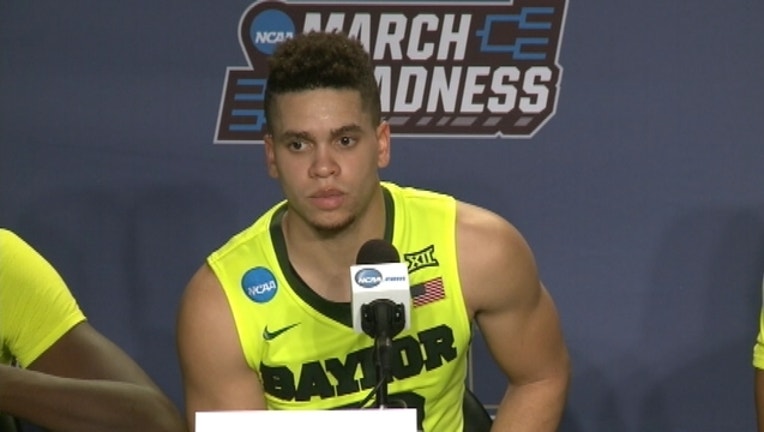 WACO, Texas (AP) - Manu Lecomte is like so many other players who made the NCAA Tournament. They grew up with dreams of making big plays on the biggest stage.

Like his four-point play to start a personal scoring surge late in the second-round game that finally put Baylor ahead to stay and helped push the Bears to another Sweet 16.

What is different about Lecomte is that he grew up in Belgium, where soccer is the favorite sport. He wasn't exactly on the recruiting trail for Division I basketball coaches, and nobody else in his family played basketball, not even the uncle who was a coach and taught him the game.

"I guess it's unique," he said. "When I was 4 or 5 years old, and he just got me started, and he started training me every day, and I just loved it. I loved the competition, I loved the game."

Baylor (27-7) will be in New York to play South Carolina at Madison Square Garden on Friday night. It is Baylor's fourth Sweet 16 in eight seasons.

Lecomte was 3-of-15 shooting in the NCAA Tournament before making a go-ahead 3-pointer while being fouled with 4:40 left Sunday against Southern Cal. He had been scoreless in the game, but that was the first of his eight straight points in a 45-second span, and 12 the rest of the way in an 82-78 win.

"That dude makes huge plays , huge plays. He's one of those guys, he likes a challenge," said new North Texas coach Grant McCasland, the former Baylor assistant who recruited Lecomte. "You look at his size and know he's always had to fight uphill."

Listed at 5-foot-11, Lecomte is the only player on the Baylor roster shorter than 6-3.

When still in Belgium, Lecomte would watch NBA games online, as well as college games and the NCAA Tournament. He was already familiar with those bright Baylor jerseys, though he took another path to get to Waco.

Former Miami assistant coach Michael Huger had played pro basketball in Belgium and knew Lecomte's coaches. The Hurricanes offered him a spot without ever seeing him in person.

"I got lucky," Lecomte said. "That was one of the only schools that really offered me. I just needed one chance, one team that wanted me, and I thought Miami would have been a great fit."

While he started 40 of 71 games during two seasons with the Hurricanes, Lecomte decided to leave after standout point guard Angel Rodriguez left Kansas State for two final seasons at Miami along with some other transfers.

McCasland, who had been aware of him as a high school and amateur player on Belgian national teams, visited Lecomte after he left Miami.

"I had a great feeling, and I just loved it," Lecomte said. "I just loved the opportunity."

Except for having to sit out last season because of NCAA transfer rules. He was able to practice countless hours with the team and on his own, but couldn't play until this season - when Baylor needed a point guard.

"I just worked so hard on my game. I was in the gym every day, every night," he said. "I would have never thought one day I would be like I'm not going to play for a year. That would have been impossible for me. But now I did it and I overcame it, it was all worth it."

McCasland, who won 20 games at Arkansas State in his only season as head coach there before taking the North Texas job this week, said Lecomte became an elite player because of the time he spent in the gym on his own.

There were several other game-winning moments before Southern Cal.

In the Bahamas on Thanksgiving week, Lecomte scored Baylor's last 11 points in a 71-63 win over VCU. In his first Big 12 home game, Lecomte finished only 2-of-9 shooting but made a high-arcing shot on a short jumper over a defender with eight seconds left to beat Iowa State 65-63. There was also a game-clinching 3-pointer with 23 seconds left in a 78-75 win at Ole Miss.

"I really call it instinct," Lecomte said. "Just playing without thinking or having any doubts or anything. ... When I play my best is when I don't think, and I just play by instinct."