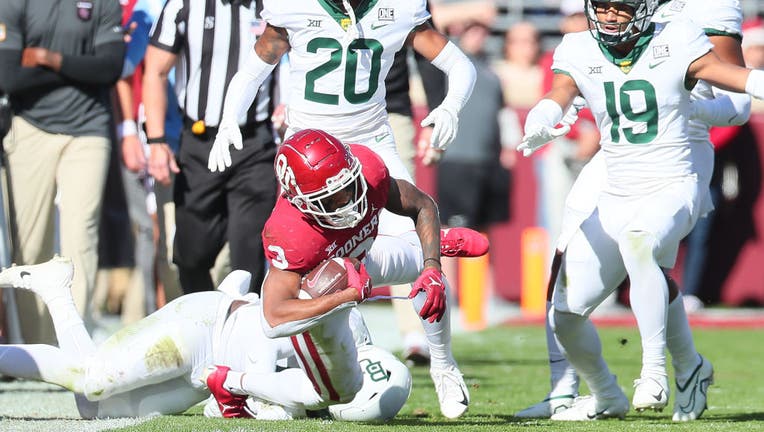 NORMAN, OK - NOVEMBER 05: Oklahoma Sooners WR Jalil Farooq (03) dives for extra yards after tackle during a game between the Oklahoma Sooners and the Baylor Bears at Gaylord Memorial Stadium in Norman, Oklahoma on November 5, 2022. (Photo by David St

Williams, a fifth-year junior, had rushed for 456 yards his entire injury-plagued career before exploding against the Sooners. His top performance this season had been 68 yards rushing against BYU, and he did not play in Baylor's previous two games.

Oklahoma's Dillon Gabriel passed for 261 yards and two touchdowns and ran nine times for 70 yards and another score. But he threw three interceptions -- all in the first half -- after just throwing one all season before Saturday's game.

Eric Gray rushed for 106 yards and two touchdowns and caught eight passes for 58 yards for the Sooners (5-4, 2-4), who had won two straight.

Despite Gabriel's mistakes, Baylor led just 24-21 at the break because the Sooners gained 334 yards in the first half.

Qualan Jones' 10-yard touchdown run with 9:15 remaining in the fourth quarter gave Baylor a 38-28 lead. Gray's 1-yard score with 4:05 remaining cut the Bears' lead to 38-35, but Baylor ran out the clock on the next possession.

Baylor: The Bears pulled off the win, despite getting just 132 yards passing out of Blake Shapen and just seven yards on four carries from freshman phenom Richard Reese. They could work their way back into the next Top 25 after spending most of the early part of the season there.

Oklahoma: The Sooners gained 499 yards and basically moved the ball at will, but turned the ball over too many times. The defense struggled with tackling throughout and couldn't get the critical stop it needed late.