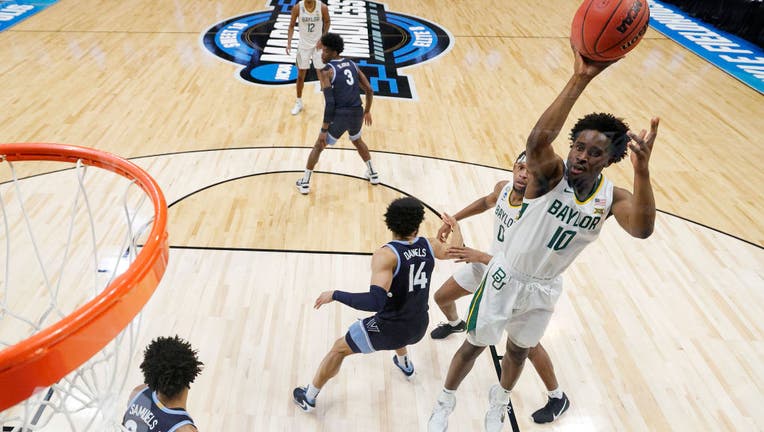 INDIANAPOLIS, INDIANA - MARCH 27: Adam Flagler #10 of the Baylor Bears takes a shot against the Villanova Wildcats in the second half of their Sweet Sixteen game of the 2021 NCAA Men's Basketball Tournament at Hinkle Fieldhouse on March 27, 2021 in I

INDIANAPOLIS (AP) - Top-seeded Baylor overcame some frigid outside shooting Saturday to move into the Elite Eight, getting 16 points from Adam Flagler in a 62-51 victory over Villanova and its versatile defense.

Baylor, which started the season 18-0 and won its first-ever Big 12 regular-season title, is one win from the Final Four for the first time since 2012. The Bears will play Arkansas in the South regional final.

This game changed midway through the second half when Baylor all but abandoned what is normally its go-to shot — the 3. The Bears took a six-point lead with a 14-2 run during which not a single point came from outside the arc.

The Bears played some defense, too. Baylor held Villanova to 37.5% shooting in the second half and 0 for 9 from 3.

The Wildcats (18-7) got 16 points from Jermaine Samuels, but only three from Caleb Daniels on 1-for-11 shooting.

Davonte Davis hit a short jumper with 2.9 seconds left, and Arkansas beat Oral Roberts to advance to the Elite Eight for the first time in 26 years.

The Muss Buss grinded its gears through the first half into the second, bad shots and even worse defense putting third-seeded Arkansas in a 12-point hole against the 15th-seeded Golden Eagles.

Eric Musselman’s Razorbacks (25-6) got their swagger back, turning defensive stops into early offense opportunities and offensive rebounds into points.

It came down to one final shot and Davis made it, sending Arkansas to the Elite Eight for the first time since the Nolan Richardson "40 Minutes of Hell" days.

The let-it-fly Golden Eagles (18-11) let history slip through their grasp. Max Abmas did his best, scoring 25 points. His 3-point attempt at the buzzer bounced off the front of the rim.

Warith Alatishe added 10 points and 11 rebounds for the Beavers (20-12), who were picked to finish last in the Pac-12 but ran roughshod through the conference tournament and have kept on winning on college basketball’s biggest stage.

They’re headed for their first Elite Eight since 1982 — one that was later vacated by the NCAA — and will play second-seeded Houston on Monday night for a spot in the Beavers’ first Final Four since 1963.

Not even the fervent prayers of Sister Jean could help Loyola (26-4) deal with the constantly changing defenses that Oregon State coach Wayne Tinkle rolled out. The Ramblers wound up shooting 33% from the field and 5 of 23 from beyond the arc.

Justin Gorham had 13 points and 10 rebounds for the second-seeded Cougars, who pushed through to their first trip to a regional final in 37 years.

The Cougars also got a strong all-around effort from DeJon Jarreau, who finished with nine points, eight rebounds and eight assists while leading the defensive effort that kept Boeheim in check.

Buddy Boeheim managed just one first-half basket and finished with 12 points on 3-for-13 shooting, including 1 for 9 from 3-point range.