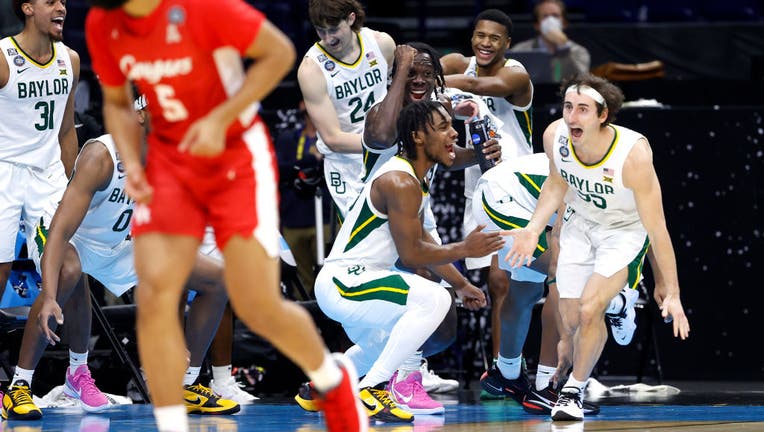 INDIANAPOLIS, INDIANA - APRIL 03: The Baylor Bears celebrate in the final minutes prior to defeating the Houston Cougars 78-59 in the 2021 NCAA Final Four semifinal to advance to the National Championship game at Lucas Oil Stadium on April 03, 2021 i

INDIANAPOLIS (AP) - Baylor has its defensive mojo back. Play like this one more time and the Bears could be national champions for the first time.

Baylor shut down Houston in a suffocating first half and cruised into its first national championship game since 1948, throttling the Cougars 78-59 Saturday night.

Baylor (27-2) made a mockery of the first Final Four game of night, using an 18-3 run to build a 25-point halftime lead. The Bears had five players score in double figures and made 11 3-pointers to earn a spot in Monday's championship game against Gonzaga or UCLA.

Their defense stole the show.

Flying around Lucas Oil Stadium, the Bears had the Cougars (28-4) stumbling across the floor with wave after wave of defenders who can guard any position, any spot on the floor.

A defensive demolition that bodes well for Monday's title game, no matter who the Bears play.

A late-season COVID-19 pause seemed to take the air out of the Bears' unbeatable-til-then defense, the rotations not quite as sharp, close-outs not quite as close. Baylor found its flow once the NCAA Tournament started, stifling one opponent after another while winning it first four games by nearly 15 points per game.

The Bears' first Final Four in 71 years gave them an extra jolt of energy.

Baylor was downright unbearable against Houston, so fast on rotations it appeared there were six Bears on the floor at times. Baylor made every shot a chore for Houston during a overwhelming first half, switching or trapping ball screens to prevent open looks, collapsing in the paint whenever the Cougars did break free.

Marcus Sasser found the seams in Baylor's perimeter defense, scoring 17 points on 5-of-7 shooting from 3 in the first half. The rest of the Cougars combined for three points, with only DeJon Jarreau making a bucket.

Quentin Grimes, Houston's leading scorer and a third-team All-American, had no points and missed all five of his first-half shots. Mitchell and Vital were responsible that end of Baylor's dominance, taking turns hounding him every step.

Grimes got it going a little in the second half, scoring 13 points, but finished 1 for 8 from the 3-point arc overall.

The Cougars found a bit of rhythm in the second half, too. Not enough to make up the massive deficit caused, in large part, by Baylor's defensive display.