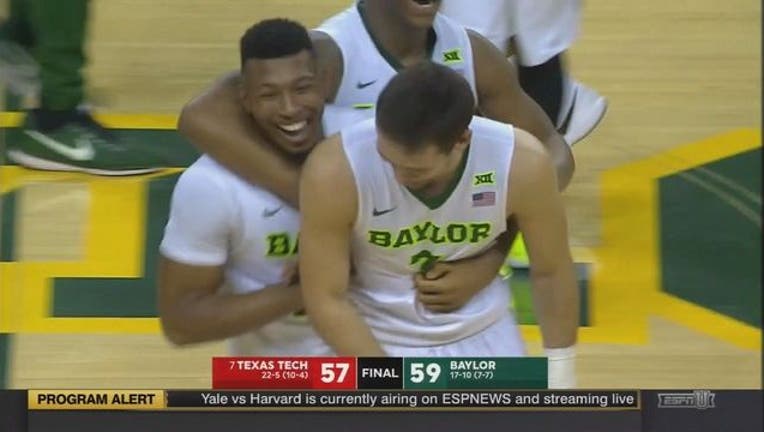 Maston, who finished two points shy of his career high set in the previous game against Texas, hit the go-ahead shot with 1:26 remaining as the Bears (17-10, 7-7 Big 12) continued their push for the NCAA Tournament with a fifth straight win following a 2-7 start in the rugged conference.

Baylor moved into sole possession of fifth place, and Texas Tech (22-5, 10-4) dropped into a tie for first with No. 13 Kansas with four regular-season games remaining.

Freshman Zhaire Smith led the Red Raiders with 15 points, but had just two points and attempted just two shots after halftime. Justin Gray had 13 points and eight rebounds before fouling out in the final minute.

Evans, the No. 2 scorer in the Big 12 behind Oklahoma freshman sensation Trae Young, limped off with 1:14 left in the first half and didn't return. He jogged to and from the locker room at halftime and tested the injured foot on the court before the second half started.

But Evans bent over at the waist at midcourt with a Texas Tech staff member next to him while his teammates warmed up, looking unfit to play.

Mark Vital had two blocks in the final minute with Baylor protecting a one-point lead. Manu Lecomte had 10 points on 3-of-14 shooting. Vital had eight points and eight rebounds.

Leading by a point with two timeouts, King McClure threw a bad pass for a turnover, but Texas Tech freshman Jarrett Culver missed a long 3. After Jo Lual-Acuil made one of two free throws, a desperation heave by Francis at the buzzer was short.

The Bears shot 25 percent in the second half but held the Red Raiders to 35 percent after halftime. Texas Tech didn't score again after Brandone Francis hit a 3 for a 57-53 lead with 3 minutes remaining.

Texas Tech: The Red Raiders almost survived without Evans by turning to their defense, one of the best in the country in terms of field goal percentage. But when they needed their go-to guy in the final minutes, they didn't have him. The offense showed it.

Baylor: It was just the second win in 10 games against ranked teams for the Bears. They likely will need another win or two to make sure they extend a school record with a fifth straight trip to the NCAAs. But this win appears to be a big step.