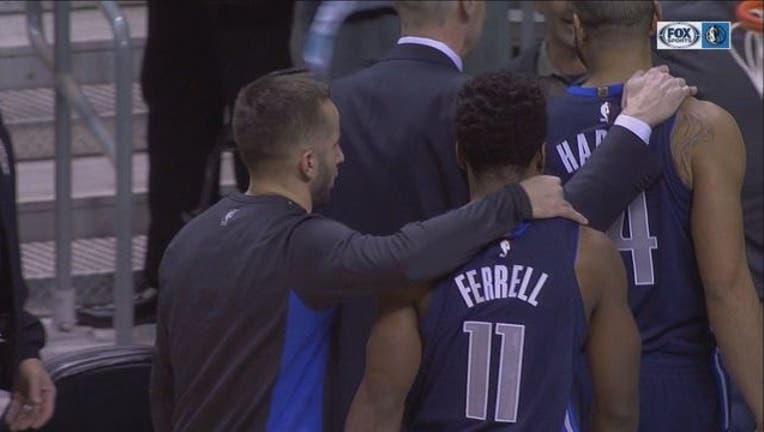 Dirk Nowitzki added 19 points for the Mavericks, and Dennis Smith Jr. had 15.

The Mavericks were playing their third game in four days, while the Hornets were coming off a four-day layoff. But Dallas showed no signs of wearing down in the fourth quarter, repeatedly thwarting Charlotte's attempts to take the lead.

Kemba Walker had 41 points on 16-of-28 shooting for the Hornets. Dwight Howard had 15 points and 12 rebounds for Charlotte, but was an anemic 5 of 18 from the foul line which proved costly in a close game.

Charlotte trailed by six entering the fourth quarter, but Jeremy Lamb buried a 3-pointer from the right wing to pull the Hornets even with 9 minutes left.

But the Hornets could never grab the lead.

The big play came with 2 minutes remaining when Salah Mejri ripped an offensive rebound away from Howard and kicked out a pass to Ferrell, who knocked down a 3-pointer from the top of the key to give the Mavericks a 5-point lead.

Barnes followed with a long 3 on the next possession.

The Hornets weren't done though, battling back to cut the lead to 111-110 with 31 seconds left on a pair of layups by Walker, including one off a half-court steal.

But after a miss by Walker, Barnes put the game away with two free throws with 10 seconds left.

Mavericks: The team was awarded two-way forward Jalen Jones on a waiver claim. Per team policy, terms of the deal were not disclosed. In a related move, the Mavericks also requested waivers on two-way guard Kyle Collinsworth. Jones appeared in four games for the New Orleans Pelicans as a rookie this season, averaging 1.3 points per game.