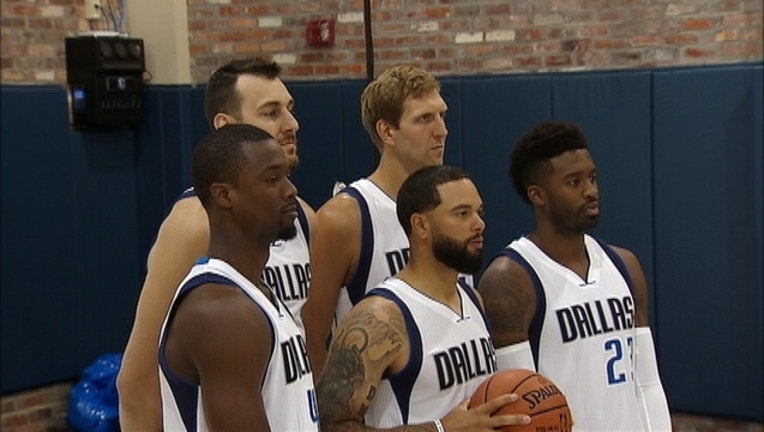 DALLAS (AP) — Harrison Barnes and Andrew Bogut are in, Chandler Parsons and Zaza Pachulia are out and Dallas coach Rick Carlisle has a retooled roster for the sixth consecutive time since winning a championship.

"Well, we love it," Carlisle said at media day this week as someone chuckled. "What's more exciting than getting seven new guys? New blood. It's fresh every year.

"Really, that wasn't meant to be a joke," he added. "If you view it as a negative, there's a pretty good chance it's going to be a negative. I don't look at it that way."

The Mavericks have made the playoffs all but one season since the constant turnover started after owner Mark Cuban chose salary cap flexibility over keeping a few key players when a new labor agreement was reached six months after his team won the title in 2011.

But Dallas still hasn't won a postseason series since beating Miami in six games in those NBA Finals.

Repeated efforts to land big names in free agency failed, which this year led to the additions of Barnes and Bogut from 2015 champion Golden State after the Warriors lured Kevin Durant from Oklahoma City and had to unload both starters to make cap room for the four-time NBA scoring champion.

Barnes headlines the group of newcomers because he'll be a top option on offense after signing a four-year, $94 million max contract. Over his four seasons with the Warriors, he was always a role player behind Stephen Curry and Klay Thompson.

"It's going to be bigger expectations and I'm going to have a larger role on this team," Barnes said. "I feel like we have a lot of pieces this year, either coming back off injury, guys who are motivated, have a lot to prove. So hopefully we can all come together and do something special."

There's actually some stability in the starting five because point guard Deron Williams is back for a second season with his hometown team.

Nowitzki, going into his 19th season at age 38, says Williams was the best player on the team at times last season, and the Mavericks missed him in their five-game loss to Oklahoma City. He was limited by a sports hernia injury that required offseason surgery.

Parsons signed a max deal with Memphis, and Pachulia went to the Warriors after the trade that landed Dallas the 7-footer Bogut, who should be a much stronger shot-blocking presence than his predecessor.

The changes fit the formula of at least two new starters each season going back to the title year.

"There are similarities to other years," Carlisle said. "The ability to add Bogut and Barnes was huge for us. We caught some good luck on that."

The other notable newcomer is Curry's younger brother, Seth Curry, who is on his fifth team in his fourth season but finally had a more prominent role last season in Sacramento. Former Baylor standout Quincy Acy is in Dallas after bouncing around his first four years.

The Mavericks are deep at guard with holders J.J. Barea and Devin Harris behind Williams and Wes Matthews, in his second season as the shooting guard and now more than a year removed from tearing an Achilles tendon his final season in Portland.

"They're definitely athletes and we should be able to have a great defensive lineup once I'm out," said Nowitzki, poking fun at his defensive skills. "I think we have a (backup) lineup out there that could be really, really good, and obviously youth and athleticism is a big part."

Barnes wanted to be a part of it even though the Mavericks appear further from championship contention than other Western Conference teams.

"I think when you look at what this franchise has done year in, year out, stable on their ship," Barnes said. "And be able to learn from a guy named Dirk who's done it year in, year out. He's pretty much built this place through his work ethic."

And now Nowitzki is getting used to another new collection of teammates.