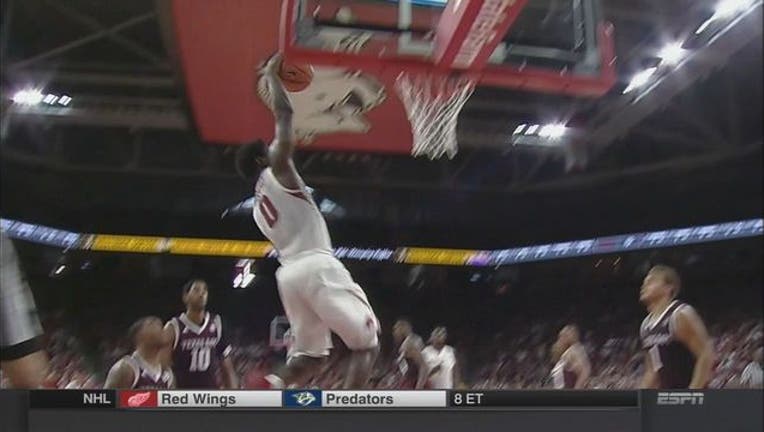 FAYETTEVILLE, Ark. (AP) - Daniel Gafford capped off the most difficult stretch of his young Southeastern Conference career with a disappointing and foul-plagued performance the last time Arkansas faced Texas A&M.

The standout Razorbacks forward remembered that game all too well, and it showed as he added yet another dominating effort to his remarkable freshman season on Saturday.

The 6-foot-11 freshman was on a mission to atone for that loss, and it showed as he hit his first five shots and punctuated the dominating win with a late dunk.

Gafford had plenty of help from his teammates, with Jaylen Barford scoring 14 of his 21 points in the second half and adding five rebounds and five assists for the surging Razorbacks.

Also, Daryl Macon finished with 20 points for an Arkansas team that's won seven of its last nine. It was the eighth time in the last nine games Macon has scored 20 or more. C.J. Jones had 13 points off the bench.

Robert Williams had 20 points and 14 rebounds to lead Texas A&M (17-10, 6-8), which lost its second straight after entering the rankings this week. The 6-foot-10 sophomore also had three blocks and finished 10 of 13 from the field.

"There's not many teams going to come in here and beat Arkansas when they shoot the ball like they did today," Texas A&M coach Billy Kennedy said. "I thought they shot the ball extremely well and made some tough shots."

Texas A&M entered the game 3rd nationally and tops in the SEC in rebounding with an average of 41.9 per game. The Aggies also outrebounded Arkansas 45-30 in their win last month, but the Razorbacks turned the tables on Saturday - finishing with a 45-33 edge on the glass.

Freshman Darious Hall followed up his career-best 11-rebound effort in a win over Mississippi earlier in the week with seven rebounds in only 17 minutes on Saturday, and Gafford and senior Trey Thompson had six rebounds apiece.

"This is a team that beat us by 15 at their place, and they're one of the better rebounding teams in the country with all that size," Arkansas coach Mike Anderson said. "Somehow we found the energy. We found the players that were really engaged and going to get those rebounds."

Texas A&M: The last time the Aggies won in Fayetteville was March 1, 1986, when both teams were members of the Southwest Conference and Arkansas still played in Barnhill Arena. They led only once on Saturday, a 4-2 advantage that disappeared quickly after the Razorbacks went on an 11-0 run. Texas A&M was 0 of 7 on 3-pointers while trailing 43-32 at halftime, and it just avoided matching its season low for 3-pointers - finishing 4 of 17 as a team.

Arkansas: The win starts a difficult five-game stretch to end the regular season for Arkansas, which entered Saturday 32nd in the NCAA's RPI ratings. Beginning with the 18th-rated Aggies, the Razorbacks face teams all 31st or higher in the ratings during the five games - including Kentucky, Alabama, Auburn and Missouri. They started the stretch in dominating fashion on Saturday, a key victory for a team hoping to reach the NCAA Tournament for a third time in four seasons this year.

The Razorbacks host Kentucky on Tuesday.