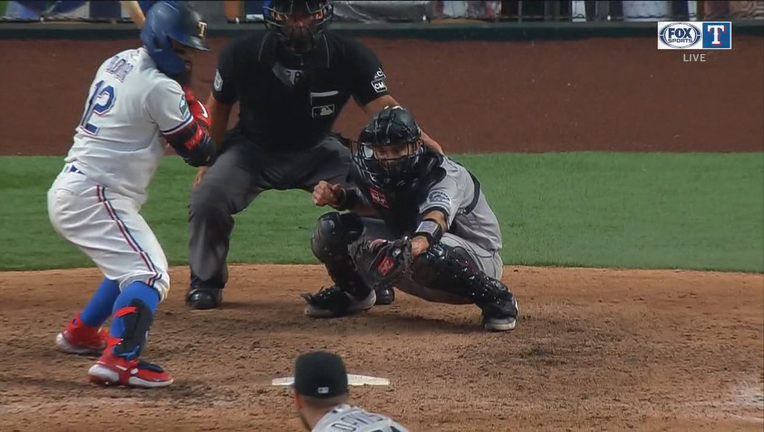 ARLINGTON, Texas (AP) - Daniel Bard won in his first major league game in more than seven years, pitching 1 1-3 scoreless innings in relief for the Colorado Rockies in a 3-2 win over the Texas Rangers on Saturday.

Bard (1-0), whose control troubles ran him out of baseball, got the Rockies out of a jam when he took over for starter Jon Gray with two on and two outs in the fifth. The right-hander worked around two more base runners in the sixth, getting Willie Calhoun on an inning-ending flyout to cap an 11-pitch at-bat.

Wade Davis, back in the closer role for the Rockies after some struggles last season, worked the ninth for his first save since July 25, 2019 — exactly a year earlier — though he gave up a run.

Colorado went ahead to stay with two runs in the fourth off Mike Minor (0-1), helped by two fielder’s choice plays and two errors. David Dahl, the leadoff hitter who had all three Rockies hits in the season-opening 1-0 loss, added an RBI single in the seventh.

A first-round pick by the Boston Red Sox in 2006, Bard made his big league debut three years later. He developed control issues in 2012 and trouble only got worse when he was unable to consistently find the plate with any of his pitches. In his last appearance for Boston on April 27, 2013, he threw only one strike in his nine pitches. His last win had been May 29, 2012.

After several unsuccessful comeback attempts through 2017, the 35-year-old Bard spent last year as a player mentor and mental skills coach for the Arizona Diamondbacks. He decided to try one more time and made the Rockies roster this summer.

Bard threw 20 of 25 pitches for strikes Saturday, including his first one before Elvis Andrus flied out to end the fifth.

Gray struck out three and walked three while allowing one run in 4 2-3 innings. Minor struck out six in five innings, while giving up two runs (one earned), and had one of the two errors that led to Colorado runs.

After winning their first game played under the closed retractable roof in the new $1.2 billion Globe Life Field, the Rangers missed a chance to start a season 2-0 for the first time since 2011, when they went to the second consecutive World Series. The Rangers left 12 runners on base, including multiple runners in the fifth through eighth innings.

Shin-Soo Choo led off the Rangers first with an opposite field drive, but left fielder Garrett Hampson made a leaping catch, extending his glove above the eight-foot wall to take a homer away from Choo, who drove in a run with a single in the fifth.

Two-time AL Cy Young winner Corey Kluber makes his first MLB start in nearly 15 months when he makes his Rangers debut in the series finale. His right forearm was broken by a comeback liner in his last start for Cleveland on May 1, 2019. LHP Kyle Freeland, who was 3-11 last season, pitches for Colorado.