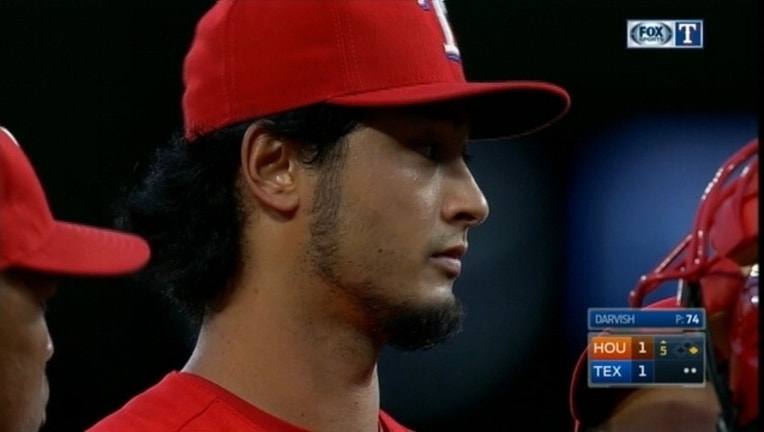 Darvish, in only his third start for the Rangers since Tommy John surgery in March 2015, left after feeling tightness in his right shoulder during the fifth inning. He was shaking his arm after throwing a 63 mph breaking pitch to strike out George Springer but faced two more batters to finish the inning.

Houston had lost its first eight games this season against its AL West and instate rival. The Astros had also lost 12 straight in Arlington, matching their club record for longest road losing streak against one opponent.

Doug Fister (6-3) got his fifth straight win over his last eight starts -- all Astros victories. The right-hander had five strikeouts while allowing one run over six innings.

Altuve hit a hard chopper past third base and down the left-field line off Tom Wilhelmsen (2-3) to score Marwin Gonzalez and Springer, who had both singled.

Springer led off the game with his 14th homer, the only run allowed by Darvish.

The Rangers said Darvish was pulled as a precaution, and that an examination by team physician Dr. Keith Meister revealed no issues.

After striking out Springer for the second out of the fifth, Darvish walked Altuve before pitching coach Doug Brocail visited the mound with a trainer and an interpreter. Darvish threw a couple of warmup pitches before retiring Carlos Correra on an inning-inning fly out with the game tied 1-1.

Texas had planned for Darvish, who won each of his first two starts, to throw up to 95 pitches. But he threw only 76 pitches, with seven strikeouts and four walks.

Darvish made five injury rehabilitation starts for Double-A Frisco and Triple-A Round Rock last month and rejoined the Rangers May 28 against Pittsburgh, and pitched against Seattle on Friday night.

Springer and Altuve had two hits. In 16 games since Springer took over in the leadoff spot, and Altuve dropped to second, they are hitting a combined .353 (48 of 136). ... The Rangers had their season-best five-game winning streak snapped. ... Ian Desmond had an RBI groundout for the Texas run in the third, after the center fielder threw out Jason Castro trying to score in the top of the inning.

Rangers: 3B Adrian Beltre felt tightness in his left hamstring after rounding second base in the eighth inning. Jurickson Profar took over as a pinch-runner and then played third base. The Rangers said Beltre would be re-evaluated Thursday. ... C Robinson Chirinos is expected to be back with the Rangers on Thursday, the same day he is eligible to come off the DL (broken right forearm). It was unclear when exactly he would be reinstated from the DL.

Rangers: LHP Martin Perez (4-4) goes for his fourth consecutive win. He is facing the Astros for the first time this season.