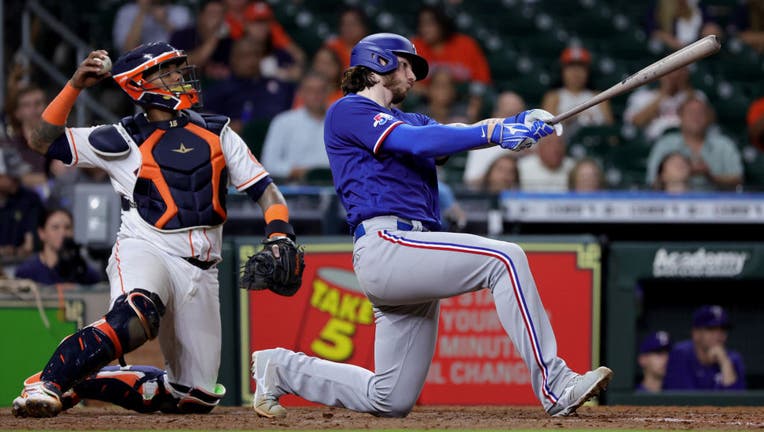 HOUSTON, TEXAS - MAY 19: Jonah Heim #28 of the Texas Rangers strikes out to end the eigth against the Houston Astros at Minute Maid Park on May 19, 2022 in Houston, Texas. (Photo by Carmen Mandato/Getty Images)

But with the Astros clinging to a one-run lead and the bases loaded with two outs in the eighth inning, manager Dusty Baker decided to stick with the veteran instead of using a pinch hitter.

Baker's decision paid off when Maldonado hit a three-run double to give the Astros some insurance in a 5-1 win over the Texas Rangers.

"Sometimes, in the right circumstance, you’ve got to give a confidence at-bat to somebody," Baker said. "It was a left-hander and fortunate for us Martín cleared the bases. You can’t hit for him all the time or else he’ll never get any confidence."

Jose Altuve added a season-high four hits to back a strong start by Framber Valdez and help the Astros continue their home dominance of the Rangers.

The victory extended Houston’s winning streak at home against the Rangers to 11. Texas went 0-9 at Minute Maid Park last season and hasn’t won in Houston since Sept. 16, 2020.

The Astros, who lost two of the last three on the road, won their ninth straight overall at home.

Valdez (3-2) allowed six hits and a run while tying a season high with seven strikeouts in seven innings for his second straight win. The left-hander got off to a shaky start with a leadoff walk and a balk in the first that helped the Rangers take a 1-0 lead. He settled after that to hold them scoreless over the next six innings and lower his ERA to 2.68.

"He was good," Baker said. "He was very good, and he dialed it up when he had to. He was probably throwing harder in that seventh inning than he was any other time in the game. He emptied the tank. He wanted that victory bad."

Altuve, who hit two doubles, scored in the first to tie it before an RBI single by Kyle Tucker put Houston on top 2-1.

Josh Sborz walked three straight batters to load the bases with one out in the eighth and was replaced by Matt Moore. Moore struck out José Siri before Maldonado smacked his double to clear the bases and make it 5-1.

"Being able to help on the offensive side ... that was huge," Maldonado said.

Glenn Otto (1-2) pitched well after giving up the two runs early, but the Rangers couldn’t provide any run support after the first to keep the rookie winless since April 22. He yielded seven hits and two runs in a career-high six innings.

"They didn’t hit him hard," Texas manager Chris Woodward said. "Early on they hit a couple of balls hard, but after that he did a really, really nice job for us."

Eli White drew a leadoff walk before advancing to second on a groundout by Marcus Semien. A balk by Valdez sent White to third and the Rangers took the lead when White scored on a single by Corey Seager.

Altuve opened Houston’s first with a double and moved to third on a wild pitch. Otto plunked Alex Bregman before Altuve scored on a one-out single by Aledmys Díaz to tie it. Bregman was thrown out at third on the play and Díaz moved to second.

Tucker put Houston up 2-1 when he lined a single to right field to score Díaz.

The Astros had a shot to add to the lead in the second inning with Siri was on second base with two outs. Altuve singled and Siri sprinted toward home, but Charlie Culberson’s throw beat him there to end the inning.

Rangers: C Mitch Garver was activated from the 10-day injured list before Thursday’s game. OF Nick Solak was optioned to Triple-A Round Rock to make room for him on the roster.

Both of the Houston Texans' first-round picks in this year's draft threw out ceremonial first pitches before Thursday's game. Kenyon Green, an offensive lineman taken 15th overall, went first and threw a strike. Not to be outdone, defensive back Derek Stingley Jr., who was the third pick, followed with a strike, too.