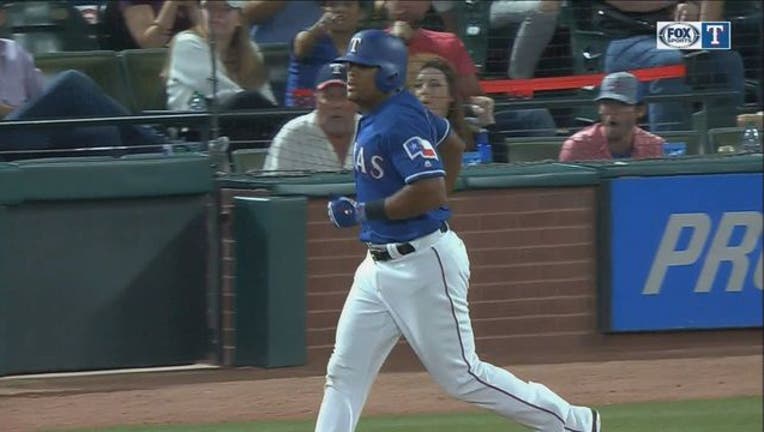 Jed Lowrie hit a tiebreaking double before Texas slugger Adrian Beltre left with a hamstring injury, and the A's beat the Rangers 3-2 on Tuesday night, tagging Cole Hamels with his fourth loss before the end of April for the first time in the left-hander's career.

Beltre strained his left hamstring coming out of the batter's box in the eighth inning and limped to first base on what would have been a double but was instead a single for his 3,075th career hit.

The 39-year-old third baseman in his 21st season didn't sound optimistic after the game but wanted to wait for an MRI on Wednesday before saying much else.

If Beltre ends up on the disabled list, the Rangers won't have any of their opening day infielders in those spots for the finale of what is already a fifth straight series loss at home, the most to start a season since the franchise moved to Texas in 1972.

"We already have our key players hurt on the middle infield," Beltre said. "We didn't need another one. It's no secret we've been struggling offensively. We're trying to find a way to get through it."

Texas shortstop Elvis Andrus is out at least another month after breaking his right elbow when he was hit by a pitch April 12. Second baseman Rougned Odor has been out since April 10 with a left hamstring strain.

When Andrus got hurt, Joey Gallo was shuffled to left field from first base, where rookie Ronald Guzman is starting now. Delino DeShields has returned to center field after a broken hand sidelined him for three weeks and weakened the Texas outfield significantly.

"It's gut-wrenching, to say the least," said manager Jeff Banister, whose Rangers (8-17) have matched their second-worst 25-game start and are 3-12 at home. "However, I'll continue to say this: There is no timeout. We'll continue to play."

Lowrie's seventh-inning liner over the glove of a diving DeShields came against reliever Matt Bush after two doubles off Hamels in an inning that included a pair of Oakland baserunners getting thrown out at third base.

Andrew Triggs (2-0) allowed one run in six innings with six strikeouts, and former closer Santiago Casilla pitched a scoreless ninth for his first save in Oakland's eighth win in nine games since a 5-10 start.

"There's no coincidence that we've been winning games when we've been getting starting pitching six innings or more," manager Bob Melvin said.

Mark Canha broke a scoreless tie in the sixth with his third homer, a solo shot that went in and out of leaping right fielder Nomar Mazara's glove just above the fence. Matt Olson hit an RBI double in the eighth.

Beltre's liner to the gap when he was injured was a single that scored Shin-Soo Choo from first. Beltre had two hits and both Texas RBIs, the other coming on a sacrifice fly.

GET IN THERE, ROOKIE

Oakland rookie Lou Trivino struck out two batters to finish the eighth after coming in cold when Blake Treinen took a line drive from Choo off his right leg and had to leave the game. Melvin said Treinen had a bruised shin and would be evaluated Wednesday.

Trivino was called up from Triple-A Nashville earlier in the day when Yusmeiro Petit went on the bereavement list following the death of his mother in Venezuela. Petit was away from the team for four days earlier this month to spend time with his mom.

Athletics: RHP Liam Hendriks was to have a procedure Tuesday to remove a cyst in his right hip, with a plasma injection for a muscle tear. Hendriks was already on the disabled list because of a right groin strain. He should be throwing off a mound in a few weeks.

RHP Kendall Graveman (0-4, 10.07 ERA), Oakland's opening day starter, has allowed at least four runs without throwing more than five innings in all five starts, the longest such streak to begin a season for an A's pitcher since at least 1908. RHP Doug Fister (1-2, 3.59) is scheduled for Texas in the series finale as he returns from a right hip strain. His most recent start was April 9.