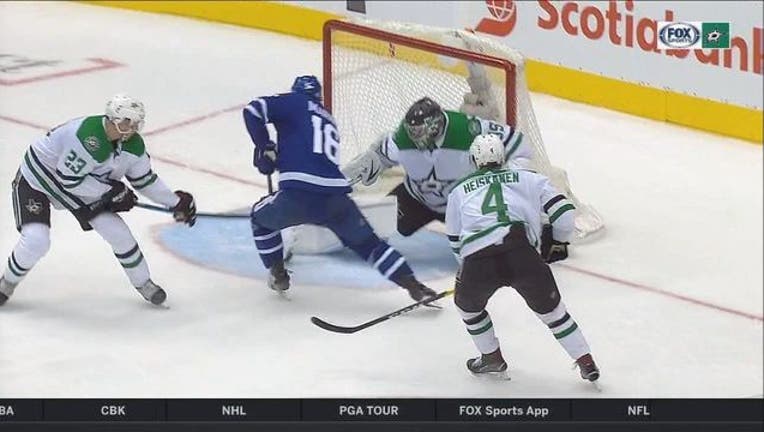 Khudobin made 31 saves to help the Stars beat the Maple Leafs 2-1 on Thursday night.

"He's such a great teammate," Dallas coach Jim Montgomery said. "He brings energy every day. He puts a smile on everyone's face. With (Bishop) playing so well it's been hard to get him in as many games as we'd like. "But it's great for his confidence, great for the team morale how good he played."

Patrick Marleau scored for Toronto, and Frederik Andersen made 17 saves.

"Our team was engaged, I thought we worked hard, I thought we started good," Maple Leafs coach Mike Babcock said. "In the end, you've got to score. A little adversity for our group. Dig in. That's it."

Coming off a 4-1 victory in Montreal on Tuesday night, the Stars opened the scoring midway through the second period just as a Toronto penalty expired. Seguin fired a shot from the top of the left faceoff circle that Benn tipped past Andersen for his fifth goal of the season.

The Stars made it 2-0 at 4:43 third on Shore's goal off a feed from Mattias Janmark.

Marleau scored on a power play with 3:09 to go.

NOTES: Toronto defenseman Ron Hainsey played his 1,000th game. The 37-year-old was joined at center ice by his wife and three children for a ceremony before the opening faceoff. ... Roman Polak and Connor Carrick, a pair of former Toronto defensemen now with the Stars, were honored with a video tribute during the first TV timeout. Carrick missed his second straight game with a foot injury.

Stars: At Washington on Saturday night.