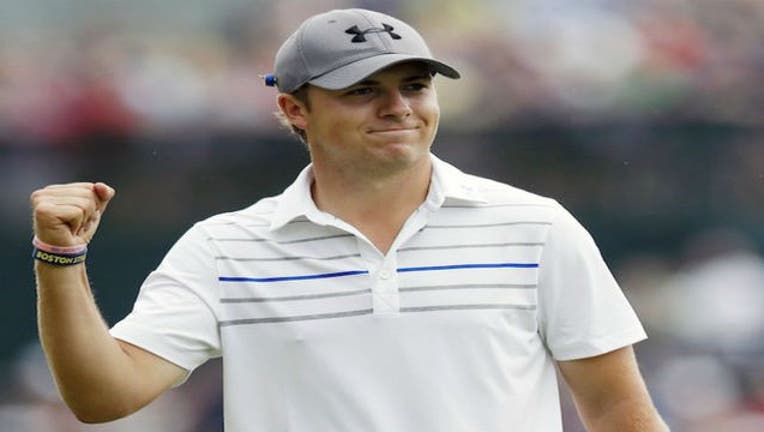 SHEBOYGAN, Wis. (AP) — The cheers erupted as Jordan Spieth walked down the eighth fairway late in his second round Friday at the PGA Championship, but only when the fans saw the portable scoreboard tailing behind him.

The applause was more about appreciation than surprise.

It showed Spieth at 6-under par, tied for the lead. And while his 5-under 67 left him at least one shot behind going into the weekend, the 22-year-old Texan was right in the mix at yet another major.

Jason Day and Matt Jones were at 9 under when the second round was suspended by thunderstorms Friday afternoon. It was to be completed Saturday morning.

He felt like he was guiding his drives instead of swinging the club. He didn't have to wait 12 holes for his first birdie, rolling one in from 18 feet on his second hole. And he holed a bunker shot for birdie on the 18th hole that gave him momentum for the back nine.

"With a couple of chip-ins for the week and really smart course management, and good speed control, we've been able to hold ourselves in there," Spieth said. "But in order to keep shooting rounds like today, I'm going to need to drive the ball a little bit better and make a few more putts, which are really the two keys for me this weekend. Because it's just going to get more challenging with pin locations and firmness of greens."

Spieth at one point was seven shots behind early in his round as he and Rory McIlroy struggled to get going. The turning point came at the 18th hole, and it showed some of his golf savvy. During the practice rounds at Whistling Straits, Spieth learned that the bunker just right of the 18th green had more sand than the others, so he knew if his hybrid went right it wouldn't be the worst spot.

The only trouble was the lie. He thought it would be in a flat spot of the bunker, not close to the back lip. He thought about aiming some 10 feet out to the right, but decided to cut across the ball.

"I just struck it absolutely perfectly," he said. "It was sitting nicely on top of the sand to where it was possible. But no, I was not looking to make that. I would have taken 4 and walked off a very, very happy guy."

His caddie, Michael Greller, held up two fingers when the bunker shot went in for birdie.

They have an annual bet on the number of times Spieth holes shots from off the green, and it counts double at the majors. So he's up to 18. The number this year was 14, and Spieth hit that last week at Firestone. The more Spieth makes from now until the end of the season, the higher that bar moves for next year.

At stake? Greller has to take him to dinner. That doesn't sound so bad, except that Spieth can invite whoever he wants. And Spieth has a lot of friends. The dinner party for last year's bet was in the neighborhood of 20 people.

The birdie, however, sent Spieth on his way.

On a scorching day, Spieth got hot. He rolled in a birdie from 10 feet on No. 1, and then nearly hit the wrong club on the par-3 third. At the last minute, he switched up to a 9-iron and watched it release to 5 feet for another birdie. And he joined the lead, albeit briefly, with an up-and-down from short of the green at the par-4 sixth.

It just never seems to stop.

The Masters. The U.S. Open. Two other PGA Tour titles. The close call at the British Open to end the Grand Slam. Asked if he was fatigued, Spieth only smiled.

"I feel good," he said. "I've got a chance to win a major championship. Just thinking about that gives you enough adrenaline so that there won't be any issues. ... But as far as mentally in this position, the way the year's gone, I approach each event as if it's the only event of the year when I stand on the first tee. That gets me through that.

"I'm sure at the end of the year, it will be nice to sit back and hang the clubs up for a couple weeks," he said. "But until then, we have a lot to play for."