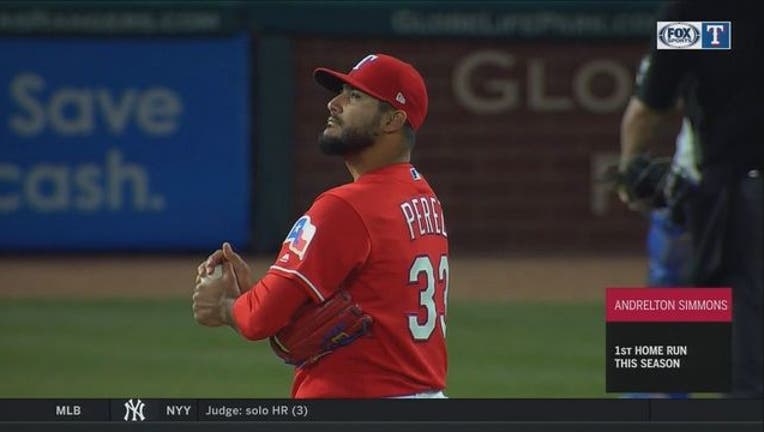 ARLINGTON, Texas (AP) -- Mike Trout and Andrelton Simmons each homered, Albert Pujols had two more hits in his push to 3,000 and the Los Angeles Angels beat the Texas Rangers 11-1 on Tuesday night.

Angels rookie two-way sensation Shohei Ohtani grounded out as a pinch-hitter in the ninth after not playing in the series opener Monday night, a day after he threw seven scoreless innings with 12 strikeouts against Oakland. Ohtani could be the DH for the finale in Texas.

Trout's fourth home of the season was a 441-foot solo drive that hit high above the Angels bullpen in left-center in the second inning. Simmons led off the next inning with his first homer to make it 5-1 against Martin Perez (1-1).

Pujols has 2,983 career hits after his two singles.

Tyler Skaggs (2-0) struck out seven while allowing one run and throwing 114 pitches in five innings. The lefty allowed five hits and walked four.

After Perez retired the first two batters in the game, five straight Angels reached base. The first run scored on a wild pitch before Jefry Marte and Chris Young had consecutive RBI singles.

Perez allowed eight runs and nine hits and was done after walking the first two batters in the fourth.

Angels: 2B Ian Kinsler (groin) is expected to be activated from the disabled list for Thursday's series opener at Kansas City. ... LHP Andrew Heaney, on the DL because of left elbow inflammation, felt good following a bullpen session Monday and is expected to make his season debut Thursday or Friday against the Royals.

Rangers: 2B Rougned Odor (left hamstring strain) and RHP Doug Fister (right hip strain) were put on the 10-day DL after both aggravated injuries in the series opener Monday. Odor is expected to be out three weeks, and Fister will be out two to three weeks.

Jaime Barria, a 21-year-old right-hander who was pitching in the Class A California League a year ago, is set to make his major league debut for the Angels. Ohtani could DH against a lefty for the first time when Los Angeles goes for a series sweep at Texas against Matt Moore (0-2, 11.05 ERA).