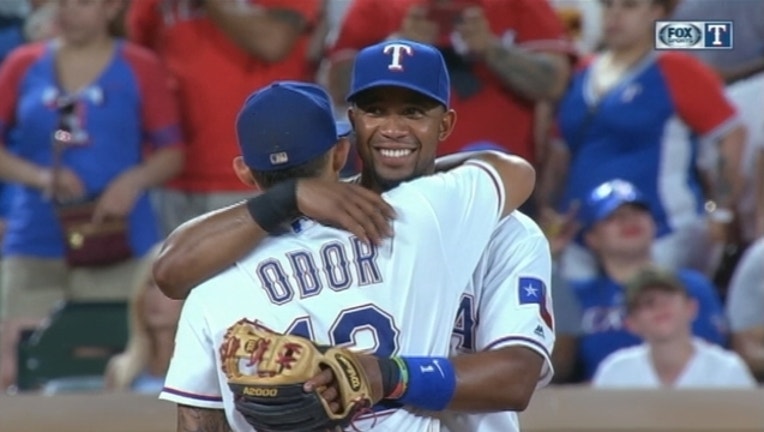 OAKLAND, Calif. (AP) — Elvis Andrus had been dealing with flu symptoms and kept his celebration rather subdued after the Texas Rangers clinched the AL West, so he asked manager Jeff Banister afterward to please put him in the lineup again Saturday. He promised to be ready to play.

The lone veteran in the lineup a day after Texas won captured another division title, Andrus showed it by hitting a pair of two-run homers in the Rangers' 5-0 victory against the Oakland Athletics on Saturday.

"Yesterday unfortunately it was the first time I couldn't celebrate with the guys or go after the game and celebrate, so I was like I might as well play tomorrow if I won't be able to celebrate the right way," he said.

Yu Darvish (6-5) had all the run support he needed on a couple of big swings from Andrus, who had his first career multi-homer game. Andrus, who will get a break Sunday, also established career highs for homers with eight and RBIs with 68.

Andrus said "it means a lot" to have that production, and told teammates he would one day have two home runs in a game.

"They're going to laugh when I bring up a conversation about homers, for sure, I don't have too many in my career," he said. "They didn't today."

Darvish allowed only Stephen Vogt's two-out single in the first until Yonder Alonso singled with one out in the fifth. Marcus Semien followed with a walk, but Darvish escaped unscathed.

Banister rested his regulars aside from right fielder Nomar Mazara and Andrus, who had his second career four-RBI game.

Darvish had been 0-3 on the road, winning for the first time in seven away starts, but he had no-decisions in his last three. Darvish allowed two hits, struck out nine and walked one in seven innings a day after Texas became the first AL team to clinch a playoff spot with its second straight division title and seventh AL West title overall.

Three relievers finished the five-hit shutout. Darvish had lost to the A's his previous time out, allowing seven runs over five innings in an 11-2 loss last Saturday in Arlington.

Now, ace lefty Cole Hamels and Darvish seem poised to give the Rangers a powerful 1-2 to start the playoffs.

"I'm sure the confidence level is high," Banister said.

A's rookie Raul Alcantara (1-2), someone Melvin considers a candidate for the rotation next season, struck out six with one walk over six innings. He allowed four runs on seven hits and has surrendered five home runs in four major league starts.

Oakland had the bases loaded in the eighth but Vogt flied out.

Rangers: RHP Tony Barnette threw 20 pitches to hitters as he works back from a strained oblique and could get into games early in the week. He has no lingering discomfort in his left side. "I'm ready to roll," he said. "Back to normal." ... OF Shin-Soo Choo hit against Barnette. On Friday, he took batting practice for the first time since August surgery to have a plate inserted for a fracture near the left wrist. ... LHP Derek Holland is moving to the bullpen as Banister, his staff and general manager Jon Daniels evaluate how the Rangers' playoff roster might look. Carrying eight relievers over the seven Texas had a year ago for a five-game division series defeat to Toronto is Banister's leaning right now.

Athletics: RHP Sonny Gray threw close to 50 pitches between his warmups and a simulated game with the hopes he still can get into a game situation before season's end. Gray hasn't pitched since Aug. 6 because of a strained right forearm. How Melvin uses him is still to be determined. "I know his routine suggests he's used to starting," Melvin said. "We'll see."

Rangers: RHP Colby Lewis (6-3, 3.40 ERA) seeks his first win in three starts since coming off a two-month stint on the disabled list with a back strain. Lewis, projected the No. 3 playoff starter, has won four straight starts at the Coliseum since June 2014 and is 7-2 with a 2.65 ERA in 12 outings in Oakland since returning to the U.S. from Japan in 2010.

Athletics: Rookie RHP Jharel Cotton (1-0, 1.50), another young pitcher chasing a rotation spot for 2017, has allowed one or fewer earned runs and pitched at least five innings in his first three major league starts.