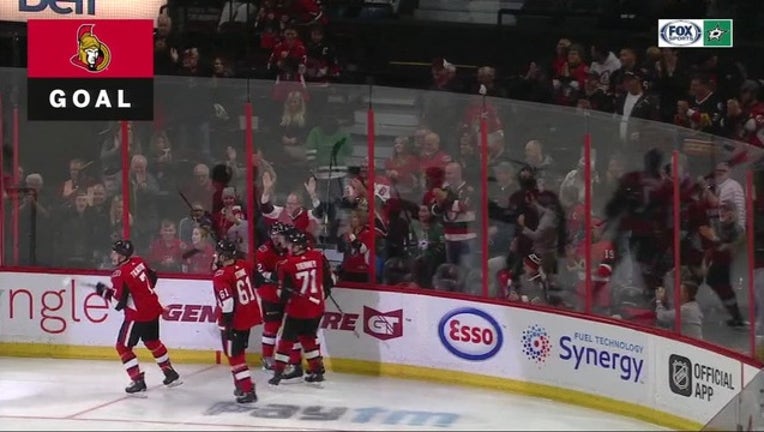 OTTAWA, Ontario (AP) - For the first time in a long time, the Ottawa Senators are having fun and picking up wins at the same time.

Craig Anderson made 37 saves to lead the Senators to a 4-1 win over the Dallas Stars on Monday night.

Ottawa is also getting contributions from its rookies, who are bringing some much-needed enthusiasm to a team that didn't have much to celebrate last season.

Rookie Maxime Lajoie tied the score for Ottawa late in the second, while fellow rookie Brady Tkachuk, Mikkel Boedker and Zack Smith scored in the third.

"The fun is watching our young guys step up and contributing at a rapid rate right at the moment," Anderson said. "It's fun watching these kids go out there and have a blast."

Despite an inexperienced lineup, the Senators rallied to improve to 3-2-1.

"We were getting lot of chances and we went after it," said Matt Duchene, who had two assists. "That's going to be our mentality all season. Even if we're down a goal we're going after it. We're not going to try and not lose because that's the worst thing you can do and I thought we did a really good job going after it."

John Klingberg had the lone goal for Dallas, which was playing its first road game after opening the season with four at home. Ben Bishop made 21 saves while losing in regulation against Ottawa for the first time (9-1-4) in his career.

"I don't think it was a terrible game, but obviously it's two points you wish you would have had," Bishop said. "That's a tough streak to lose, but eventually it was going to happen. It was a good run. Would have been nice to get the two points, but we'll have to get them next time."

With the score tied 1-1, the Senators went ahead for good early in the third as Dylan DeMelo put a shot on goal and Tkachuk, right in front, redirected it past Bishop at 1:27.

Ottawa made it 3-1 just past midway through the period as Matt Duchene, from behind the net, made a no-look pass to Boedker, who one-timed it past Bishop for his first with the Senators.

"We did a lot of really good things," Duchene said. "I thought we were good in the first, but we upped it after that and thought we deserved the win."

Looking to cut the lead the Stars pulled their goalie with more than 7 minutes left, and tried it again with over 4 minutes remaining, but Anderson was solid.

"I just wanted to put a little more urgency and give ourselves a chance," Stars coach Jim Montgomery said. "I thought the pulled goalie situation actually worked, we just didn't score the rest of the night."

Smith scored an empty-netter with 1:37 remaining to seal the win.

The Stars jumped out to a 1-0 lead on a power-play goal by Klingberg with 3:07 left in the first.

The Senators pushed back in the second and tied it with 20 seconds left when Lajoie picked up his team-leading fourth. The rookie defenseman showed plenty of patience and beat Bishop glove side. The 20-year-old had just one goal in 56 games in the American Hockey League last season.

"It's hard to explain, I'm not too sure what's going on right now," said Lajoie. "I guess I'm just at the right spot at the right time. Guys are making plays for me so it's been nice."

Montgomery wasn't happy with his team allowing a goal that late in the period.

"We didn't manage the game well even in the second when I thought they outplayed us a bit," he said. "We're in great shape and then the first two odd-man rushes we give up all game are in the last minute and 15 seconds and we have our best players out there."

NOTES: During the first TV timeout the Senators honored Ray Emery, who died July 15th. He was 35. Emery was originally drafted by Ottawa (99th overall in 2001) and spent parts of five seasons with Senators, leading them to the Stanley Cup final in 2007. Emery sits fourth in wins and fifth in games played with Ottawa.