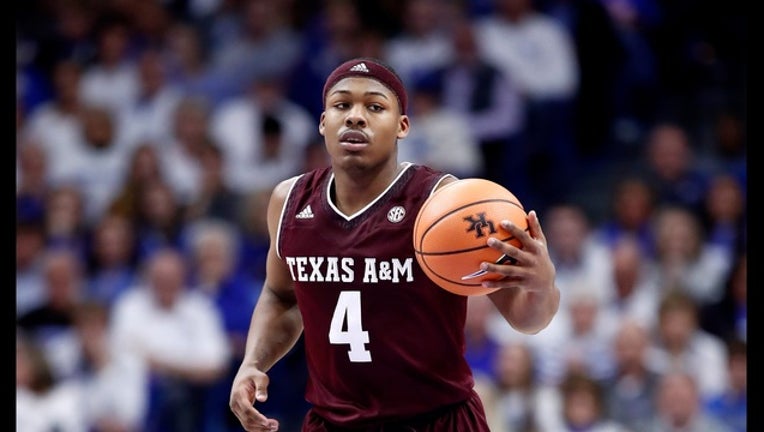 JJ Caldwell #4 of the Texas A&M Aggies dribbles the ball against the Kentucky Wildcats during the game at Rupp Arena on January 9, 2018 in Lexington, Kentucky. (Photo by Andy Lyons/Getty Images)

COLLEGE STATION, Texas (AP) - Texas A&M basketball player J.J. Caldwell has been dismissed from the team and Jay Jay Chandler has been suspended indefinitely after the two were arrested Sunday for possession of marijuana.

The school announced the punishments for the freshmen Sunday, saying they violated Texas A&M policy.

Brazos County Jail records indicate that both players were arrested by Texas A&M police on Sunday for marijuana possession. They each posted $2,000 bond and were released.

This isn't the first time Caldwell has been in trouble after the guard was suspended for the first five games of the season for violating school policy. The school did not elaborate on the reason for his suspension at the time, but Brazos County court records indicated that he was arrested on a misdemeanor charge of driving while intoxicated in May. That case was dismissed Sept. 20.