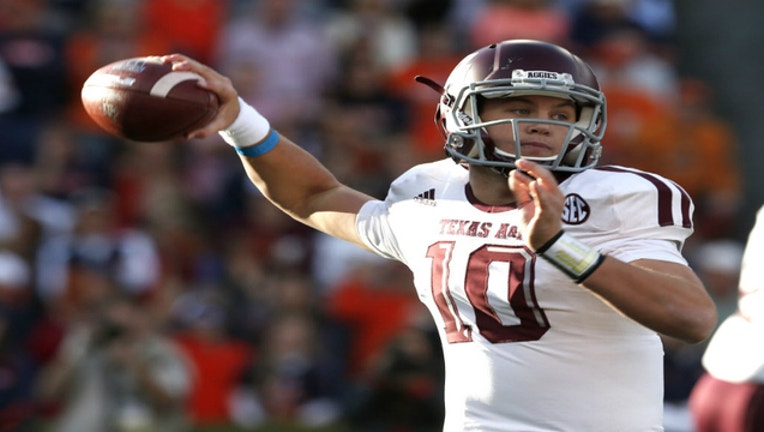 "We rolled the way we should against a pretty good team in Ball State," Allen said. "We handled our business."

Allen threw for 126 yards and three touchdowns in the first half and Texas A&M beat Ball State 56-23 on Saturday night.

It was the perfect party to celebrate the first game after a $485 million redevelopment of Kyle Field that increased its capacity to 102,733, making it the largest stadium in the Southeastern Conference and No. 4 in the nation.

"What a great atmosphere," coach Kevin Sumlin said. "It's hard to make Kyle Field better, but we did the impossible ... the noise is awesome."

A field goal by the Cardinals on their first drive cut the lead four. The Aggies (2-0) then reeled off 42 straight points, helped by a defensive score, to make it 49-3 at halftime.

"I thought our first unit played very, very well in the first half," Sumlin said. "They did what they were supposed to do."

Kyler Murray took over for Allen with about 2 minutes left in the first half and threw his first career touchdown pass for 10 yards to Christian Kirk to cap the first-half scoring.

Darian Green had a career-high 97 yards and a touchdown for Ball State (1-1).

Texas A&M extended its nonconference winning streak to 18 games, which is the longest in the Football Bowl Subdivision. Ball State dropped to 0-10 against the SEC.

Murray had 65 yards passing and a touchdown before third-string quarterback Jake Hubenak came in with about 7 minutes remaining. Murray, who scrambled for more than 4,000 yards in high school, ran just three times on Saturday.

"We forced him into some situations," Sumlin said. "He tried to settle into the pocket a little bit more than he did a week ago."

Tra Carson had 59 yards rushing and a score in the first half for A&M before he was replaced by Kwame Etwi, who finished with 12 carries for 116 yards.

Green ran for 47 and 27 yards on consecutive plays on Ball State's first drive to get the Cardinals to the 1. But the offense stalled after that and the Cardinals settled for a 21-yard field goal that made it 7-3.

Allen connected with Josh Reynolds on a 3-yard touchdown pass to make it 14-3 with about 7 minutes left in the first quarter. Two plays before the touchdown, Allen played receiver when he grabbed a short halfback pass from Carson and scurried for a 28-yard gain.

Brice Dolezal had a 33-yard touchdown run before De'Vante Harris returned an interception 40 yards for a touchdown to wrap up the scoring in the first quarter and make it 28-3.

Allen threw touchdown passes of 3 and 20 yards in the second quarter before he was replaced by Murray with A&M up 42-3.

Kirk, who returned a punt for a touchdown last week, had a 56-yard return that set up A&M's first score in the second quarter.

"I think you guys can see now that we have a pretty special playmaker in Christian Kirk," Allen said. "He's just a spark plug."

Green scored Ball State's first touchdown on a 6-yard run early in the third quarter, and the Cardinals added two field goals after that to cut it to 49-16.

Texas A&M's only score in the second half came when Etwi fumbled on the 1 and 6-foot-6, 300-pound offensive lineman Koda Martin pounced on the ball in the end zone to make it 56-16 with about 10 minutes left.

James Gilbert had a 1-yard touchdown run for Ball State later in the fourth.

"It was a disappointing loss," Ball State coach Pete Lembo said. "(But) our guys kept competing and that doesn't surprise me. We've never had a problem with that."

In the third quarter, Sebrina Brunson became the first woman to officiate a game involving a SEC team, according to SEC director of communications Chuck Dunlap. Brunson, who is an alternate official in the Sun Belt Conference, was an alternate for the game and took over after halftime. The SEC oversees officiating in the Sun Belt and used crews from that conference Saturday because of the large number of SEC teams with home games. Female officials are rare, but aren't unheard of in major college football. Cat Conti, who officiated the Michigan-Utah game last week, worked a Big 12 game last year.