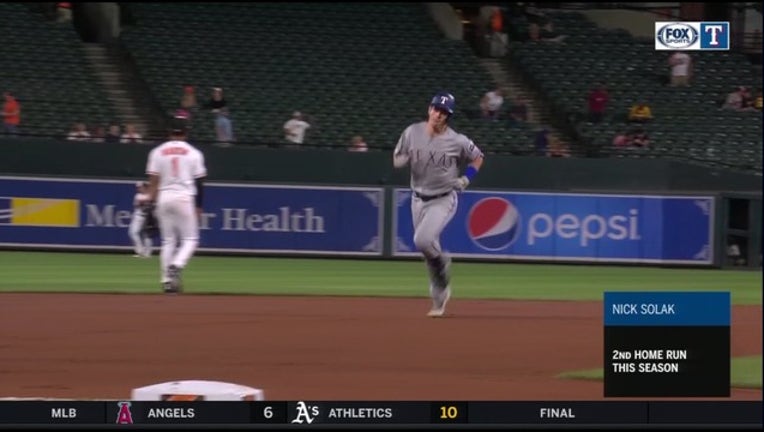 BALTIMORE (AP) - Rookies Kolby Allard and Nick Solak have made an impact for the Texas Rangers, who are looking to the future.

"Allard gets into the seventh inning without his fastball command. Finding a way to get out of jams when he gets into it," Rangers manager Chris Woodward said.

A 22-year-old left-hander acquired from Atlanta for reliever Chris Martin on July 30, Allard (4-0) allowed one run and eight hits in 6 1/3 innings with two strikeouts and two walks.

"I did not have my best stuff today," Allard said. "I knew I had to grind."

Jose Leclerc gave up a leadoff double to Mason Williams in the ninth, walked Rio Ruiz with two outs, then retired Hanser Alberto on a flyout for his 10th save in 14 chances, dropping the Orioles to 46-94. After going 47-115 last season, the team is headed to consecutive 100-loss seasons for the first time since the St. Louis Browns went 54-100 in 1953 and the Orioles finished with the same record the following year.

The announced crowd at Camden Yards was just 8,209.

"I feel like I was getting ahead well," he said. "I feel like my changeup was doing what it should have done. Yeah, it's frustrating because it just seems to be that last inning that I need to get through and as a starter you have to finish the outing."

Baltimore was 0 for 13 with runners in scoring position.

"We didn't do a very good job with a situational hit tonight," manager Brandon Hyde said. "We left 13 on. We had our opportunities."

Texas batters struck out 10 times, their 74th time reaching double digits this year, and raised their major league-leading total to 1,401. The 2013 Houston Astros hold the record at 1,535.

Trey Mancini, who had three hits, doubled leading off the sixth and scored on Renato Nunez's sacrifice fly

Means retired 10 in a row before Willie Calhoun singled starting the seventh. Solak, hitting cleanup for the first time in the big leagues, followed with his second homer since his debut on Aug. 20.

"It doesn't matter where I bat, the goal is the same: to get hits, get on base, score runs, drive in runs," Solak said.

Logan Forsythe added a run-scoring single in the ninth off Branden Kline.

Orioles: OF Mark Trumbo appeared in his third consecutive game since coming off the IL following knee surgery. Trumbo has gone 3 for 8 (.375). "Not going to push him, play him every day," manager Brandon Hyde said. "Give him a breather with his legs. But the days he's not starting, he'll be able to pinch hit."

Rangers: RHP Brock Burke (0-1, 1.50 ERA) makes his fourth big league start Friday, still in search of his first major league win. He is the first Rangers pitcher to allow two runs or fewer run over six-plus innings in each of his first three big league outings.

Orioles: RHP Dylan Bundy (6-13, 4.96 ERA) did not get a decision in last start after allowing four runs and six hits over six innings in a 7-5 loss to Kansas City.