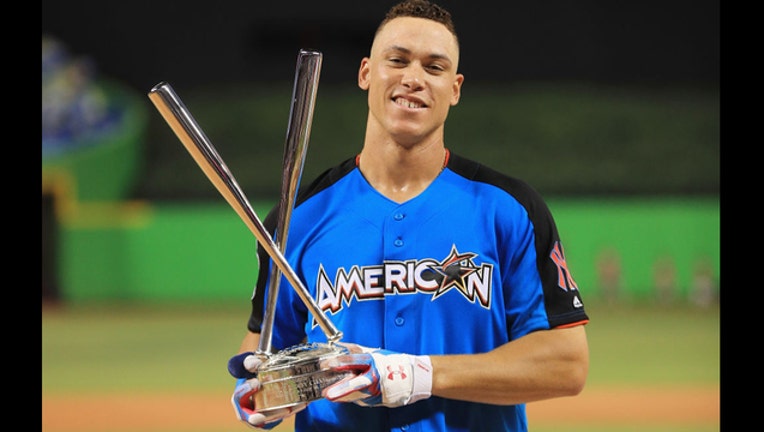 MIAMI (AP) - Aaron Judge hit the glass behind left field that supports the retractable roof at Marlins Park. He drove balls over the Red Grooms home run sculpture in left-center, over the batter's eye in center and - unusually for a Home Run Derby, to the opposite field, too.

He even hit the roof.

The larger-than-life New York Yankees slugger dominated the All-Star Home Run Derby in the same manner he has smashed his way through his rookie season, beating Minnesota's Miguel Sano 11-10 with two minutes to spare in the final on Monday night.

"It was a blast. I enjoyed every minute of it - watching the other guys swing, coming here early and talking to the media," Judge said. "Everything about today was fantastic."

Five years ago, Judge won the college home run derby in Omaha, Nebraska. This time, he outslugged some of baseball's top stars, including local favorites Giancarlo Stanton and Justin Bour of the Miami Marlins.

"A lot more fans," Judge said. "Your adrenaline is pumping, you're nervous, you're excited. But this was an incredible experience."

"I thought I had seen it all before. He didn't even look like he was getting tired," said Seattle's Robinson Cano, the 2011 Derby winner. "He was going opposite field. He was late on the ball and he was putting the ball in the upper deck."

Judge had no trouble hitting the roof, thought to be previously untouched by batted ball. That drive didn't count.

"I got it in BP, too, earlier. So I wasn't too surprised by that," Judge said.

Hitting second each time, Judge knocked out Bour 23-22 in the first round and beat Los Angeles Dodgers rookie Cody Bellinger 13-12 in the second. Then, with lightning visible behind the huge glass door, he hit a 458-foot drive above the batter's eye for the title.

"That guy Aaron Judge, he doesn't get tired," Sano said.

Many of the All-Stars sat in foul territory, some with their kids.

"I had never seen him in person. He's really impressive," said Colorado's Charlie Blackmon, who was eliminated in the first round. "The first time I saw him, he was in a crowd. I was wondering what he was standing on. He's a monster."

Judge leads the major leagues with 30 home runs, and some Yankees fans showed up to support him in their full dress - flowing black robes and white powdered wigs. Booed initially by the crowd of 37,027, Judge earned cheers once Stanton, the defending champion, and Bour were eliminated in the first round.

Judge has hit the longest home run in the regular season this year in the majors - 495 feet. He broke a TV monitor at Yankee Stadium with a BP drive that went over the center-field bleachers in May and dented a door casing with a home run last week.

In Tuesday night's game, he's set to bat third for the American League.

Stanton, who got home at about 5 a.m. after a game in San Francisco, started slowly against pitcher Pat Shine, hitting three liners before a 429-foot drive to center. Stanton began to find his grove and hit a 496-foot shot off the glass behind the left-field seats, then started spraying impressive drives. He had 15 when his 30-second bonus road started but added just one more. The crowd groaned when his last fell short.

"It just didn't work out as we had planned," Shine said.

Hitting without batting gloves, Bour excited fans with 22 homers . Judge, hitting against his regular BP pitcher, Danilo Valiente, had 22 through four minutes, according to the scoreboard, and when he hit one in bonus time he walked away. But scoreboard reverted to 22 - apparently the roof shot was subtracted - and Judge added another with a few seconds left.

Seeming tired, Sanchez opened the second round with 10 and Sano needed just 3:10 to hit 11, the longest at 491 feet. In a matchup of the leading candidates for rookies of the year, Bellinger hit 12 and Judge topped him with a minute to spare, including a 513-foot shot high off the window, a drive that left his bat at 119 mph and rose 143 feet.

"I had no pressure going into it," Judge said. "I'm a rookie. This is my first time doing it. For me, I got no expectations. I'm just going to go in there and have some fun."