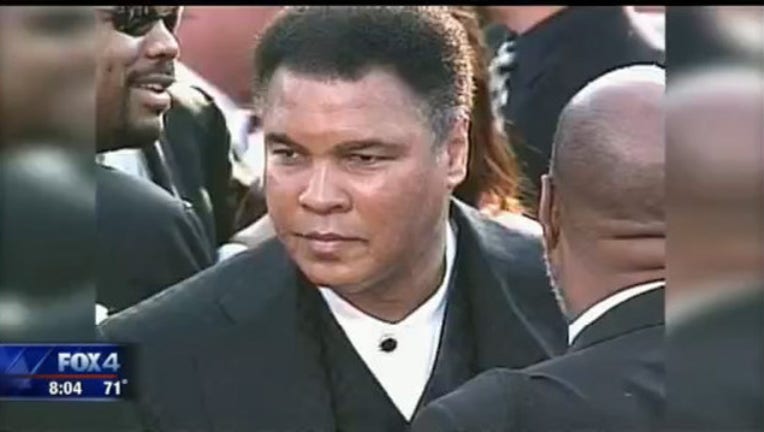 NEW YORK (AP) — During the Beatles' first visit to the United States in 1964, clever publicity agents arranged a meeting with Cassius Clay, then training for the bout that would make him heavyweight champion. The result was a memorable photo of a whooping Clay, who later changed his name to Muhammad Ali, standing astride four "knockout victims."

They were two emerging cultural forces beginning their path to global fame.

But as popular as the Beatles became, it was Ali who went on to become the most recognized person in the world. That picture was among the first to show him growing into that persona alongside the major cultural, political and entertainment figures of the era.

For a generation that came of age in the 1960s and 1970s, Ali was far more than a boxer. With a personality that could deftly dance and connect politics and entertainment, activism and athletics, his identity blended boundaries. He was an entertainer, a man at the center of swirling political and cultural change, a hero — and a villain — to many for his brash self-assuredness.

"Part of Muhammad's greatness was his ability to be different things to different people," retired basketball star Kareem Abdul-Jabbar wrote on Facebook Saturday.

"To sports fans he was an unparalleled champion of the world, faster and smarter than any heavyweight before. To athletes, he was a model of physical perfection and shrewd business acumen. To the anti-establishment youth of the 1960s, he was a defiant voice against the Vietnam War and the draft. To the Muslim community, he was a pious pioneer testing America's purported religious tolerance. To the African-American community, he was a black man who faced overwhelming bigotry the way he faced every opponent in the ring: fearlessly."

The stoic generation that had fought World War II returned home to raise children who became defined by rebelliousness, impatience, an unwillingness to accept things the way they were. Few people embodied that spirit quite like Ali.

To his job, he brought a joy and brutal efficiency. Ali didn't just beat opponents; he predicted which round he'd deliver the whuppin'. He spouted poetry while mugging for the camera.

Ali talked trash before the phrase was even invented. "This might shock and amaze ya, but I'm going to destroy Joe Frazier," he said. Much of it was good-natured, although his battles with Frazier later became ugly and personal.

Ali wasn't simply a loudmouth, since his beauty and grace within the ring delivered on the promises. He was like Michael Jordan became in another era, an athlete whose excellence could be appreciated by close and casual followers of his sport. But even Jordan, at the height of his fame, couldn't reach the profile that Ali did.

Outside the ring, the court fight over Ali's refusal to fight in the Vietnam War cost him three years at the peak of his career but earned him respect among the growing number of people turning against the war. His conversion to Islam, with his abandonment of the birth name Cassius Marcellus Clay Jr., tested the deepness of Americans' support for religious freedom, five decades before a presidential candidate talked openly about banning Muslims from coming to the United States.

It all made Ali the subject of countless arguments in playgrounds, bars, living rooms and offices. Everyone took sides when Ali returned from his suspension for refusing to join the military to fight Frazier. Whether or not you rooted for Ali often had little to do with boxing.

And think of it: When's the last time you argued with anyone about a heavyweight championship boxing match?

In a civil rights era when many Americans still denied the very humanity of black men, Ali became one of the most recognizable people on Earth.

"One of the reasons the civil rights movement went forward was that black people were able to overcome their fear," HBO host Bryant Gumbel told Ali biographer Thomas Hauser. "And I honestly believe that, for many black Americans, that came from watching Muhammad Ali. He simply refused to be afraid. And being that way, he gave other people courage."

Ali's transcendent force — his comic bravado, physical beauty and insistence on being the master of his own story — made him the athlete most favored by singers, intellectuals, filmmakers and other artists and entertainers. He socialized with Sam Cooke, Norman Mailer and George Plimpton. Ali's verbal sparring with sportscaster Howard Cosell helped make the latter's career. When Ali traveled to Zaire in 1974 for his "Rumble in the Jungle" against George Foreman, he was joined by James Brown, B.B. King, Miriam Makeba and other top musicians.

His legacy is captured in songs and prose that span decades. Author David Maraniss, who wrote about Ali in "Rome 1960: The Olympics That Changed the World," called him a "gift to writers because he offered so many themes. Bravery. Pride. Humor. Blackness. Universality.

"He was complex and contradictory yet simple and clear in what he said and what he represented," Maraniss told the AP.

Ali's fight against Foreman, and the odd conditions under which it was fought, became the subject of an Oscar-winning documentary, "When We Were Kings." In 2001, actor Will Smith starred in a Hollywood story of the boxer's life, "Ali."

Ali inspired songs from around the world. John Lennon borrowed Ali's "I'm the Greatest" catchphrase for a song that he gave to Ringo Starr. The 1977 biopic "The Greatest" was soon forgotten, but not the theme song later immortalized by Whitney Houston, "The Greatest Love of All." Rappers Jay Z, Kanye West, Nas, Common and Will Smith referenced Ali in their lyrics.

In 1988, Nobel laureate Wole Soyinka of Nigerian captured an ailing, but still vital man in "Muhammad Ali at the Ringside, 1985."

He wrote: "Promoters, handlers, it's time to throw in the towel. Parkinson's, polysyllables have failed to tease a rhyme from the once nimble Louisville lips. The camera flees, distressed. But not before the fire of battle flashes in those eyes, rekindled by the moment's urge to center stage."

Parkinson's disease quieted the man himself in his later years. The reception given to a halting Ali as he lit the Olympic torch in Atlanta in 1996 made it clear he had made the transition from a polarizing to beloved figure.

There may be no more proof of his legacy than in those who remember him. President Barack Obama keeps a pair of boxing gloves worn by Ali in his private study.

"He wasn't perfect, of course. For all his magic in the ring, he could be careless with his words, and full of contradictions as his faith evolved," Obama said. "But his wonderful, infectious, even innocent spirit ultimately won him more fans than foes — maybe because in him, we hoped to see something of ourselves."