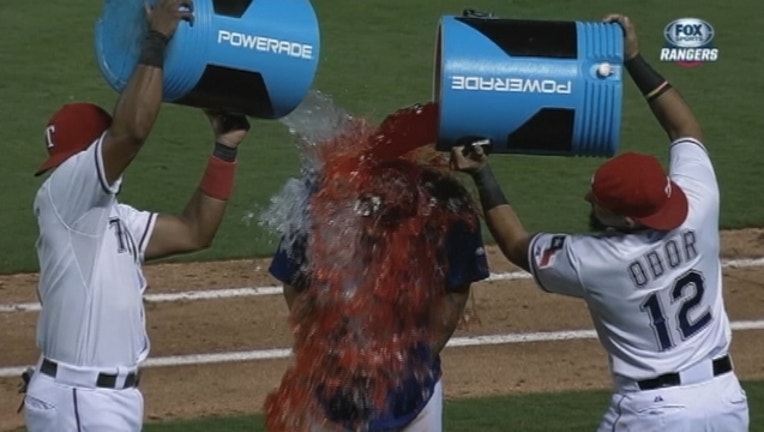 ARLINGTON, Texas (AP) — Adrian Beltre hit the first of three Texas home runs as the AL West-leading Rangers moved closer to a postseason berth with a 6-2 victory over the Detroit Tigers on Wednesday night.

Robinson Chirinos and Mike Napoli also went deep for the Rangers (86-72), who open a four-game series at home Thursday against the Angels. Los Angeles lost 8-7 Wednesday against Oakland to fall three games back in the division.

Houston, with the same 83-75 record as the Angels, played at Seattle later Wednesday night.

Yovani Gallardo (13-11) allowed nine hits over 5 1-3 innings, but gave up only two runs to win for the first time in his last four starts. The right-hander struck out five and walked one.

Detroit took a 2-0 lead in the first inning for the second night in a row, this time on a two-run double by Tyler Collins.

The Rangers got even in the bottom of the first on Beltre's 17th homer, a shot to left-center field. Beltre has an AL-best 29 RBIs in September, and 74 for the season.

Chirinos led off the second with his 10th homer, putting Texas ahead to stay. Beltre had a two-out double off the left-center wall and scored on Prince Fielder's bloop single before Napoli hit a blast to the wall behind the lower deck of seats in left field.

Tigers left-hander Matt Boyd (1-6) allowed all three Texas homers while giving up seven hits in 2 2-3 innings. He struck out two and walked one.

Tigers: Victor Martinez missed his second consecutive game with a sore left quad. ... 3B Nick Castellanos was back in the lineup after coming out in the first inning Tuesday because of a bruised right finger and sore left wrist.

Rangers: C Robinson Chirinos made only his second start since being activated from the disabled list Sept. 7 after missing more than a month with a left shoulder strain.

Tigers: After its final off day of the season, Detroit opens a three-game series Friday night at the Chicago White Sox.

Rangers: LHP Derek Holland, 0-2 with an 8.59 ERA his last four starts, pitches the series opener against the Angels.