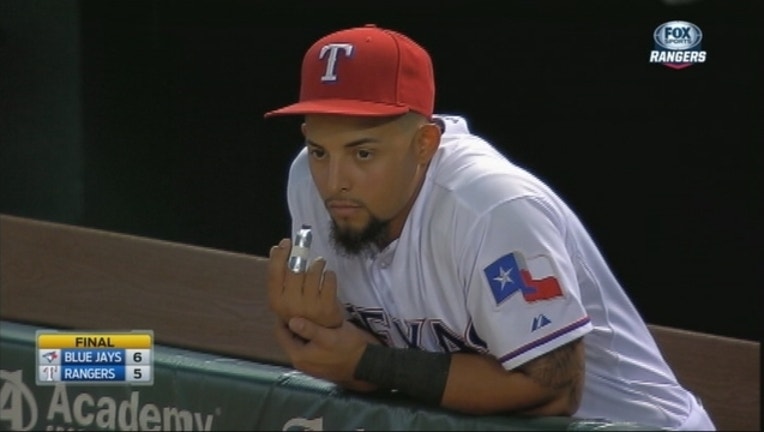 ARLINGTON, Texas (AP) — Troy Tulowitzki had a game-tying RBI single in the ninth inning before Adrian Beltre's throwing error allowed another Toronto run to score as the AL East-leading Blue Jays rallied for a 6-5 victory over the Texas Rangers on Tuesday night.

Rangers closer Shawn Tolleson walked two of the first three batters he faced. After pinch-hitter Justin Smoak flied out, Tulowitzki looped a single to left to tie the game 5-5. Josh Donaldson then hit a high chopper to Beltre, the four-time Gold Glove third baseman who fielded the ball before a wide throw to first base.

It was only the second blown save this season for Tolleson (5-3), who has 25 saves and had converted his last 12 chances.

LaTroy Hawkins (3-1) gave up three singles in a scoreless eighth before Roberto Osuna worked the ninth for his 15th save in 16 chances.

Toronto is 20-4 since acquiring Tulowitzki in a trade with Colorado last month. The Blue Jays took a one-game division lead after the New York Yankees lost 15-1 earlier Tuesday to AL West-leading Houston, which leads Texas by 4 1-2 games.

The Rangers still hold the AL's second wild card after having their three-game winning streak snapped. They have won nine of their last 12 games.

Rougned Odor homered, had an RBI double and scored another run for the Rangers. Delino DeShields also homered for Texas.

Chris Colabello, Jose Bautista and Edwin Encarnacion homered off Rangers starter Derek Holland, who went six innings in his third start since coming off the disabled list because of a left shoulder strain.

After Elvis Andrus doubled to start the fourth, Odor followed with a double to break a 3-all tie. Bobby Wilson had a sacrifice bunt before Odor scored on Ryan Strausborger's sac fly.

Odor, whose 11th homer was a solo shot in the second, left the game just before the start of the seventh inning. He lost the fingernail of his middle finger on his right hand while warming up at second base.

Mark Buehrle, who threw a no-hitter against Texas eight years ago for the Chicago White Sox, allowed five runs and seven hits over six innings.

Toronto went ahead 3-2 in the third on Bautista's 30th homer, a two-run shot. DeShields homered to start the bottom of the inning.

Encarnacion led off the sixth with his 25th homer, extending the longest active hitting streak in the majors to 20 games.

Shin-Soo Choo, who has reached base in all 29 of his starts for Texas since the All-Star break, had a single in the first and scored on Beltre's triple. Choo also singled in the ninth, but was stranded when Beltre struck out to end the game.

Blue Jays: Rookie 2B Devon Travis had another cortisone shot in his injured left shoulder after being examined Tuesday by Rangers team physician Dr. Keith Meister. He hopes to get back in the lineup this season. ... RHP Marcus Stroman, out all season with a right knee injury, will throw another simulated game Friday. Manager John Gibbons said an earlier simulated game "went well."

Rangers: CF Leonys Martin, sent to the minors three weeks ago, will have surgery Wednesday to remove the hamate bone from his right hand. ... INF Jurickson Profar, out since shoulder surgery last offseason, has joined Low-A Hickory and could possibly begin a rehab assignment as a designated hitter over the next few days.

Blue Jays: LHP David Price, 2-2 with a 7.36 ERA in five career starts at Texas, makes his fifth start for Toronto since his trade from Detroit. Price is 12-4 overall, including a 3-0 mark and 1.78 ERA for the Blue Jays.

Rangers: RHP Colby Lewis goes for his career-high 15th win, which would match the AL lead. Lewis has won six of his last seven starts.