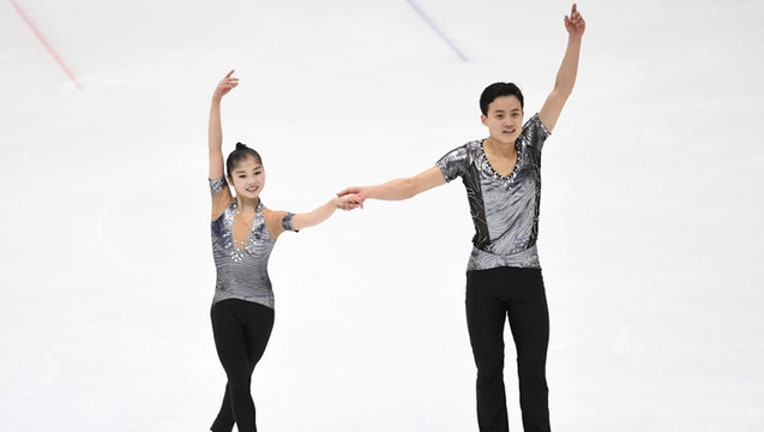 They're the friendly face of North Korea, and it looks like they're coming south to the Olympics.

With sparkling costumes and winning smiles, figure skaters Ryom Tae Ok and Kim Ju Sik could lead the North Korean team in Pyeongchang, South Korea, next month after their government said Tuesday it would send athletes to the Games.

Ryom and Kim are the only North Korean athletes who have qualified for the Feb. 9-25 Olympics in Pyeongchang so far. However, the International Olympic Committee could potentially hold extra invitational spots open to symbolize togetherness between the two Koreas.

Ryom and Kim almost certainly won't win a medal in the fiercely competitive world of pairs skating, but they've already won friends against a backdrop of political tension.

On their world championship debut last year in Finland, Ryom and Kim put in two spirited skates to enthusiastic applause from the crowd as they finished 15th, above one of the two U.S. pairs and a string of more experienced European competitors.

They weren't afraid to show their feelings, either. The 18-year-old Ryom punched the air with joy on finishing the short program to a Jeff Beck cover of The Beatles classic "A Day in the Life."

Ryom and her partner Kim embraced in their matching silver-and-black costumes before soaking up the crowd's cheers and skating off to celebrate with their coaches.

Rarely seen abroad, they have given little away about their lives, other than that they train in the North Korean capital, Pyongyang. At the world championships, Kim said he was keen to take part in "a big competition" when asked about the Olympics through a translator from his team. They wouldn't talk about visiting South Korea, and walked away when asked about their choice of music.

North Korea was far from certain to compete in Pyeongchang. It boycotted the only other Olympics hosted in South Korea, the Seoul Games of 1988, and has often skipped the Winter Olympics entirely.

It hasn't won a winter medal since 1992 and its last team in 2010 consisted of just one figure skater and one speed skater, neither of whom came close to the podium.

By contrast, North Korea punches above its wait in the Summer Olympics and won seven medals across weightlifting, gymnastics, shooting and table tennis in 2016.

Even with a deal for North Korea to compete in Pyeongchang, the two Koreas and the IOC face some thorny issues of protocol.

Flags, anthems and the opening ceremony will all require delicate negotiation.

At the Games themselves, any slip-up could spark a diplomatic incident. The North Korean women's soccer team walked off the field at the 2012 Olympics when the South Korean flag was mistakenly shown in a pre-game video package.

North and South Korean athletes have marched together at some previous Olympics during periods of warmer relations between the two governments, and South Korea has suggested a repeat in Pyeongchang. If they march separately, the South Korean team would massively outnumber the North Koreans.

For more AP coverage of the Winter Games: http://wintergames.ap.org/