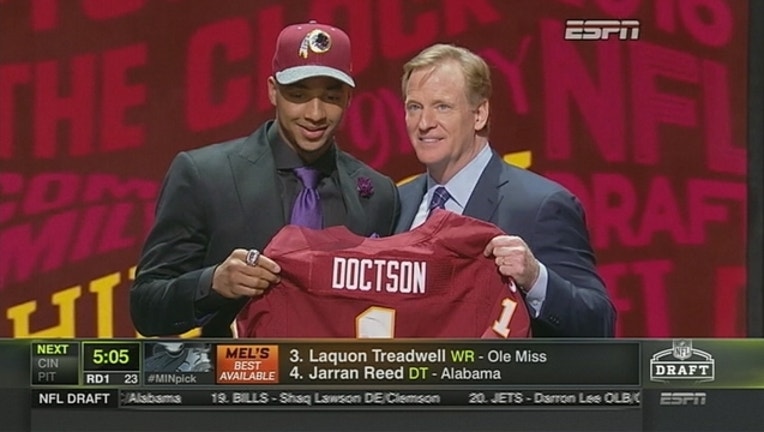 Washington originally owned the 21st choice in the first round, but moved down one spot in a trade with the Houston Texans on Thursday night and picked up an extra 2017 sixth-round choice as part of the swap.

The Redskins' selection of Doctson, listed at 6-foot-2 and 202 pounds, gives last season's NFC East champions a young wideout who has strong hands and a reputation for winning jump balls. And he plays the same position as Jackson and Garcon, who are both entering the final year of their contracts.

Doctson's senior season was cut short by a wrist injury, but he still was an AP All-American, with 79 catches for 1,337 yards and 14 touchdowns in only 11 games.

Redskins cornerback DeAngelo Hall wrote on Twitter: "You can never have too many pass catchers. The more the merrier."

There had been an expectation that the Redskins would use their first choice in this year's draft to improve at a real spot of need: defensive line. As it is, Washington's pass rush and run defense were both problems last season, and then the team lost Terrance "Pot Roast" Knighton to free agency and Jason Hatcher to retirement.

Instead, general manager Scot McCloughan decided to go with a player on the offensive side of the ball in the first round for the second year in a row. He drafted Iowa lineman Brandon Scherff at No. 5 overall in 2015.