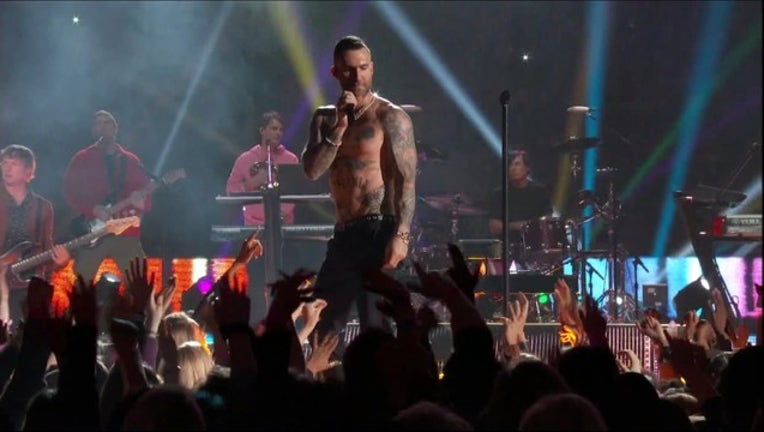 The bare-chested moment Sunday had some feminists and Janet Jackson supporters focused on how male and female nipples are treated differently in life, especially on network TV and by the NFL years after Jackson's career was derailed by a split-second halftime reveal.

"Double standard, much?" is how an InStyle headline neatly summed up the issue in the light of day Monday as the media noted how the hate quickly built online. Singer-songwriter Neko Case aptly captured the mood in an F-bomb-infused tweet likening the frontman to a half-nude greased pig.

A CBS spokesman, Chris Ender, and an NFL spokesman, Brian McCarthy, did not immediately return email requests for comment Monday.

Kimberly Seals Allers, a journalist and breastfeeding advocate, wrote of the male-female double standard on public exposure of nipples in her 2017 book, "The Big Letdown: How Medicine, Big Business and Feminism Undermine Breastfeeding." She was watching the game Sunday and joined the Twitter choir with some research she had done.

Public breastfeeding has become a flashpoint for controversy over exposure of female nipples, from the arrests of women who do it around the globe to restaurants who have banned it.

Interestingly, she wrote, male nipples were also sexualized and banned from public view until men protested, ignited in 1930 when four were arrested in Coney Island for going shirtless on a beach.

"Then Hollywood icon Clark Gable stripped off his shirt in 'It Happened One Night,'" Allers wrote, "marking the scandalous debut of a man's uncensored nipples in American cinema."

In 1935 New Jersey, 42 topless men were arrested in Atlantic City during a demonstration, according to the book. By 1936, however, after ongoing protests, neighboring New York lifted its ban on men going topless and "suddenly a man's nipples were no longer 'obscene' in society but, rather, commonplace and natural," Allers wrote.

Such an effort has been made for women in recent years, spurred on by the 2015 "Free the Nipple" movie and movement, but little headway has been made.

Allers said Monday by telephone that the Jackson controversy was the first thing she thought of when she watched Levine peel off his tank.

"The issue was around the nipple itself," she said of the decades-old bans on topless men. "Clark Gable really did what was considered a very provocative thing in the movie by taking off his shirt and that was the first time," she said. "Ever since then it became very commonplace, versus what happened to women, where their fight to not sexualize their breasts didn't have the same success."

She called it a "trap," and Jackson's Super Bowl moment remains a solid example, Allers said. It's the first thing she thought of when Levine took the show to skin.

"I thought, it must be nice to have that freedom, which women don't have," Allers said. "Janet Jackson is still being punished for that. There's just not the same level of dialogue around men and their bodies."