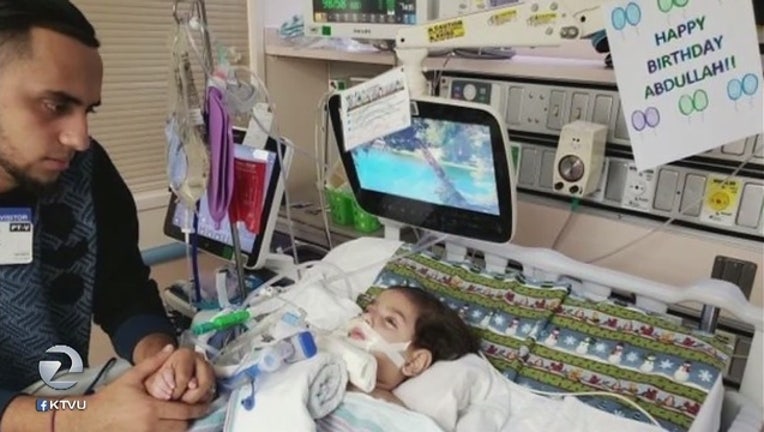 OAKLAND, Calif. (KTVU) - After a swarm of public protest, a Yemeni mother was granted a visa on Tuesday to travel to the United States where her 2-year-old son is on life support at UCSF Benioff Children’s Hospital in Oakland.

"This is the happiest day of my life," said Ali Hassan, 22, the boy's father and Swileh's husband.  "Just last week, I was about to pull him off life support. I can't thank all those who answered the call to help our family. This will allow us to mourn with dignity."

Swileh had been prohibited from entering the country because of the Trump administration’s ban on travelers from certain Muslim countries.  She had been waiting alone in Egypt, where the family first went to get medical treatment. After months, however her husband and son made the heart wrenching decision to leave her back, opting for specialized treatment at Children's Hospital in Oakland, where father and son arrived on Oct. 1.

Abdullah Hassan, who turned 2 on Saturday, has a form of hypomyelination, a disease that prevents formation of the fatty tissue that surrounds nerve cells and helps them communicate with one another.

Not all cases of hypomyelination are fatal, but in Abdullah’s case, the effect is severe enough that it is now interfering with his ability to breathe.

His doctors in  Oakland said the toddler is not expected to live much longer. It's those doctors who alerted CAIR about the family's struggle.

KTVU interviewed the boy's father Tuesday. He said he is prepared to face his son's death. "It's coming. It's either today or tomorrow where I have to pick up my son from the hospital, go to the cemetery and bury him," Hassan said.

When his wife confirmed news of the visa being granted over a facetime call, Hassan said he was excited and told Abdullah the good news. "The visa got issued!" he told his boy. "Then he got excited," said Hassan.

For Swileh, full of emotion, she shed both tears of joy and sadness, according to Hassan.

Swileh had applied for a visa more than a year ago but her "repeated requests for an expedited waiver have been ignored," according to a fundraising page set up for the family.  Father and son both have dual citizenship, as Hassan is from Stockton, Calif. She is a Yemeni national. Yemen is one of the countries under Trump's travel ban.

CAIR held a news conference with interfaith leaders on Monday in Sacramento, demanding that the mother get a "Muslim waiver ban." Many reporters contacted the State Department to find out why a mother couldn't get a waiver to visit a dying son. A spokesperson said that the department "makes every effort to facilitate legitimate travel by international visitors...All visa applications are adjudicated on a case-by-case basis in accordance with the requirements of the Immigration and Nationality Act."

The State Department did not respond for immediate comment on Tuesday to explain why Swileh's visa had suddenly been approved.

CAIR attorneys explained that in addition to organizing a public media campaign, their nonprofit partnered with Nimer Law, LLC, to file an emergency lawsuit in federal court on Monday, and were preparing to file for a temporary restraining order if the visa wasn't issued.

Swileh was initially interviewed for her visa while the proclamation was enjoined, the lawyers said, and the lawsuit alleges that the embassy in Cairo purposely delayed a decision on her application until the Muslim ban proclamation went into effect. That's when authorities informed Swileh that she was denied under the proclamation, her lawyers contend.

Under the provisions of the proclamation, once a visa is denied, consular officers are required to automatically assess whether or not individuals from the banned countries qualify for a waiver.

However, despite the family’s repeated requests to expedite and clearly document their son’s medical condition, the embassy refused to act until CAIR brought the public's attention to their plight and filed a lawsuit, the lawyers stated.

“This case is a perfect example of how the waiver process is a sham,” said Jennifer Nimer, one of the family’s attorneys. “The lawsuit ... clearly details for the court how the embassy callously ignored over 28 desperate pleas for help from the family over the past year and even the expedite requests filed by the prior attorney which contained medical documentation showing that the child was on the verge of death."

She added: "Ms. Swileh met all the criteria for a waiver yet they refused to take any action for over a year until public pressure mounted and forced them to take action.”

Despite the visa victory, CAIR civil rights attorney Saad Sweilem said that the family still will likely have a heartbreaking ending to this tale.

"Our happiness for the family is tempered by the imminent loss of Abdullah," he said.

Sweilem added there are others inevitably suffering from the same travel ban, too: "There are still many more families being separated and many more lives at stake due to the xenophobic policies of this administration."

Hassan said he wants to see the travel ban overturned. "All families are supposed to be together," he said. For one last time, his will be and he does take comfort that his wife's wish to see her dying son has been granted.