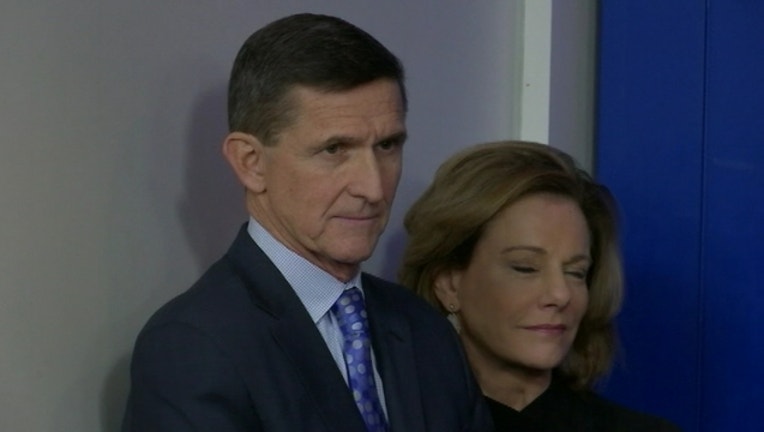 WASHINGTON (AP) - Former acting Attorney General Sally Yates, speaking publicly for the first time about concerns she brought to the Trump White House on Russia, told Congress on Monday she warned that National Security Adviser Michael Flynn "essentially could be blackmailed" because he apparently had lied to his bosses about his contacts with the Russian ambassador.

The statements from Yates, an Obama administration holdover, offered by far the most detailed account of the chain of events that led to Flynn's ouster from government in the first weeks of the Trump administration.

Yates, appearing before a Senate panel investigating Russian interference in the 2016 presidential election, described discussions with Trump White House Counsel Don McGahn in late January in which she warned that Flynn apparently had misled the administration about his communications with Sergey Kislyak, the Russian ambassador.

White House officials had insisted that Flynn had not discussed U.S.-imposed sanctions with Kislyak during the presidential transition period, but asked Flynn to resign after news reports indicated he had misled them about the nature of the calls.

"We felt like it was critical that we get this information to the White House, in part because the vice president was making false statements to the public and because we believed that Gen. Flynn was possibly compromised," Yates said.

"We knew that was not a good situation, which is why we wanted to let the White House know about it."

The Jan. 26 conversation took place two days after the FBI interviewed Flynn about those contacts. McGahn asked Yates how Flynn did in the interview, but Yates said she could not answer.

She was fired four days later by the Trump administration. James Clapper, director of national intelligence under President Barack Obama, testified as well. He retired when Trump took office.

The hearing came hours after former Obama administration officials revealed that Obama had warned Trump against hiring Flynn as national security adviser during an Oval Office meeting after the 2016 election.

The highly anticipated hearing - it was Yates' first appearance on Capitol Hill since her firing - before a Senate panel investigating Russian interference in the presidential election was expected to fill in basic details in the chain of events that led to Flynn's ouster. Word that Obama directly warned Trump suggests that concern over Flynn's possible appointment spread to the highest level of government months before Flynn's departure.

The Obama-Trump discussion was first reported Monday by NBC-TV.

Flynn's forced February resignation followed media reports that he had discussed U.S.-imposed sanctions on Russia with Ambassador Kislyak, which was contrary to the public representations of the Trump White House.

Earlier Monday, former officials said Obama had raised general concerns about Flynn with Trump and told the incoming president there were better people for the national security post. Trump's White House press secretary Sean Spicer said in response Monday that if Obama "was seriously concerned" about Flynn's connections to Russia or other foreign countries, he should have withheld Flynn's security clearance. Flynn served under Obama as defense intelligence chief before Obama dismissed him from that post.

In a second tweet, Trump said Yates should be asked under oath "if she knows how classified information got into the newspapers" soon after she raised concerns about Flynn with McGahn.

She said Monday she did not - and that she had revealed no classified information herself.

Trump has said he has no ties to Russia and isn't aware of any involvement by his aides in Moscow's interference in the election. He's dismissed FBI and congressional investigations into his campaign's possible ties to the election meddling as a "hoax" driven by Democrats bitter over losing the White House.

The Associated Press meanwhile reported last week that one sign taken as a warning by Obama administration officials about Flynn's contacts with Kislyak was a request by a member of Trump's own transition team made to national security officials in the Obama White House for the classified CIA profile of Kislyak. The revelation came after interviews with a host of former U.S. officials, most of whom spoke on the condition of anonymity in order to discuss sensitive national security information.

Marshall Billingslea, a former Pentagon and NATO official, wanted the information for Flynn, his boss. Billingslea knew Flynn would be speaking to Kislyak, according to two former Obama administration officials, and seemed concerned Flynn did not fully understand he was dealing with a man rumored to have ties to Russian intelligence agencies. When reached by the AP last week, Billingslea refused to comment. Last month, Trump announced his intention to nominate Billingslea to serve as assistant secretary for terrorist financing at the Treasury Department.

Yates' warning about Flynn in January capped weeks of building concern among top Obama officials, former officials told the AP. President Obama himself that month told one of his closest advisers that the FBI, which by then had been investigating Trump associates' possible ties to Russia for about six months, seemed particularly focused on Flynn.

Yates, a longtime federal prosecutor and Obama administration holdover, was fired Jan. 30 by Trump after refusing to defend the administration's travel ban. She had been scheduled to appear in March before the House intelligence committee, but that hearing was canceled.

The subcommittee meeting Monday is one of three congressional probes into the Russia interference, along with House and Senate intelligence panels. All the committees are led by Republicans.