NEW YORK - The woman who is accused of vandalizing a Black Lives Matter mural outside of Trump Tower in Midtown Manhattan apparently also smeared paint on murals in Harlem and Bedford-Stuyvesant overnight.

According to authorities and video posted to her personal Facebook account, the woman, Bevelyn Beatty, smeared paint across the murals created in Harlem at Adam Clayton Powell Jr. Boulevard between 125th Street and 127th Street, and the one in Bedford-Stuyvesant at Fulton Street and Marcy Avenue late Saturday night.

"We're taking our country back," Beatty said in a video posted to her Facebook and YouTube page. "Vote for Trump, vote Republican, vote for Christians."

Community advocates who helped create the privately-funded mural in Harlem say the artwork was meant to heal the community, not divide it based on politics.

"I found it interesting that she was referencing Jesus in it, and I don't see where Jesus is in doing something this hateful and disgusting," said Valerie Wilson.

"That's what's really hurtful is that they were doing it to kill the spirit that is really the resilience of the African-American community," said Nikola Evans-Hendricks, who was involved in the mural's creation. "Why would you do that? It doesn't make any sense to us at all."

Earlier on Saturday, Beatty and an accomplice were seen vandalizing the mural in front of Trump Tower, repeatedly shouting “refund our police” and “De Blasio doesn’t care about black people.”

The Black Lives Matter mural in front of Trump Tower has been vandalized for the third time in a week. Courtesy: Brian Chenensky

An NYPD officer attempting to arrest the woman slipped on the paint and tumbled to the ground, sustaining injuries to his head and arm, police said. He was listed in stable condition at Bellevue Hospital.

A police department spokesperson said the women’s names and information on possible charges against them weren't immediately available.

The city's largest police union, the Police Benevolent Association, tweeted: “Thankfully our brother will be OK, but this nonsense needs to stop. Our city is in crisis. Paint on the street helps no one.”

Saturday's incident comes after at least two people poured blue paint on the yellow letters of the mural on Friday afternoon. One person, who appears white, is wearing an "All Lives Matter" shirt and a Pride flag with the words "LGBT for Trump" around their neck. The other person, who appears to be Black, is wearing a New York Islanders ball cap and holding an American flag.

Three people, 25-year-old D'Anna Morgan, 39-year-old Juliet Germanotta and 44-year-old Luis Martinez were all arrested and charged with criminal mischief. A 64-year-old woman was issued a criminal court summons for the illegal posting of flyers.

Police are still looking for the man who poured red paint on the 5th Avenue mural on Monday afternoon. The NYPD on Friday released more images of the man they believe did it.

The city-funded mural was painted in front of Trump Tower on July 9. President Donald Trump has called the mural a "symbol of hate." 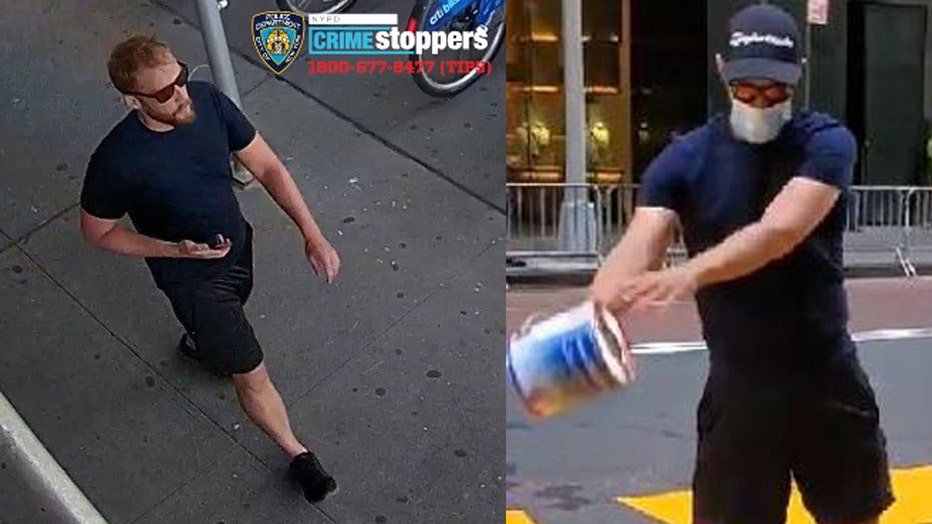 Police are looking for the person who poured red paint on the BLM mural outside Trump Tower on July 13, 2020. The NYPD released these images of the suspect.