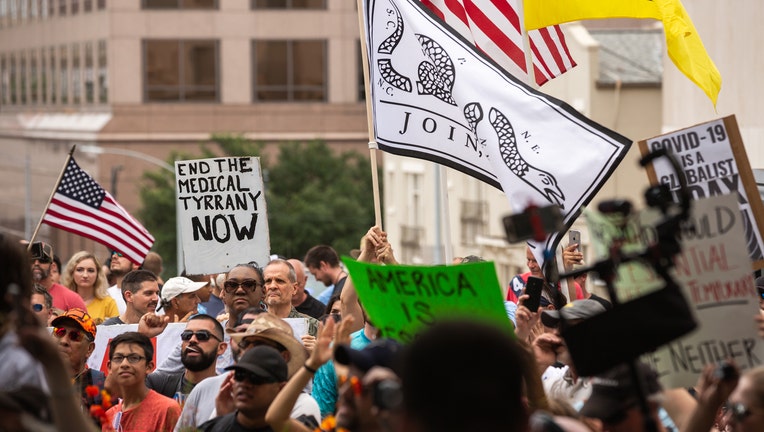 Protesters at the Governor's Mansion protest government mandates on wearing face masks in businesses and recent bar closures during the COVID-19 pandemic. June 28, 2020 In Texas, 59% of Republicans either said they are reluctant to get the vaccine or

Sam Webb says he’s not against vaccines. His kids are up to date on their vaccines for school, and he got a flu shot a few years ago, the Weatherford truck driver said.

But he won’t be getting a COVID-19 shot.

Webb, a former Army medic, is among the thousands of Republicans in Texas and across the country who say they do not trust COVID-19 vaccines and will refuse to get one — even as public health experts and elected leaders say mass vaccinations are the key to a return to normalcy from the pandemic that has plagued the nation for a year.

At the beginning of the nation’s vaccine rollout, experts warned that people of color, particularly Black and brown people, could be skeptical or fearful about getting vaccinated. But over the past few months, white Republicans have emerged as the demographic group that’s proven most consistently hesitant about COVID-19 vaccines.

In Texas, 61% of white Republicans, and 59% of all Republicans regardless of race, either said they are reluctant to get the vaccine or would refuse it outright, according to the February University of Texas/Texas Tribune Poll. That’s not an insignificant portion of the state’s population — over 52% of the state’s ballots in November were cast for former President Donald Trump.

Only 25% of Texas Democrats said they were hesitant or would refuse to get a COVID-19 shot, according to the poll.

Scientists and doctors stress that vaccines are safe and highly effective at preventing the worst outcomes of COVID-19, including hospitalizations and deaths. No one has died because of the vaccines, the U.S. Centers for Disease Control and Prevention reports. Some people may experience short-term side effects, but those effects quickly subside.

But the trend among Republicans is nationwide. A Civiqs poll updated in March indicated that white Republicans make up the largest demographic of people in the U.S. who remain vaccine hesitant with 53% saying they were either unsure about or not getting the vaccine.

Meanwhile, people of color have shown increased confidence in the vaccine over the past few months. In October 2020, 53% of Black Texans said they would not get a COVID-19 vaccine — a percentage that dropped to 29% when asked last month, according to UT/Texas Tribune polls. By comparison, 43% of Texas Republicans said they would not get the vaccine in October, compared with 41% last month.

Most hesitancy among Republicans stems from a distrust of scientists and an unfounded concern about how new the vaccine is, said Timothy Callaghan, an assistant professor of health policy management at the Texas A&M School of Public Health.

"What you do find is that over time conservatives have been more vaccine hesitant than liberals, which you can largely attribute to higher levels of distrust in the scientific establishment among conservatives," Callaghan said. "However, the actions of certain political actors over the past few years have sort of intensified those beliefs within the party."

For Webb, he said he thinks it’s more about Republicans being distrustful of the government, "and this has been pushed really hard by governmental authorities."

"I'm not against vaccines," Webb said. "I’m against something that was rushed out so quickly."

Scientists and medical experts say no corners were cut for the COVID-19 vaccines. Built on years of research of coronaviruses, combined with global collaboration and large infusions of funding, COVID-19 vaccines were able to be developed quickly. Each of the three vaccines approved so far in the U.S. underwent clinical trials meticulously reviewed by the Food and Drug Administration.

"It wasn't just this brand new thing," said Dr. Philip Huang, Dallas County’s health and human services director. "It was built on prior research and development, but it is a great tremendous scientific breakthrough."

Andrea Norman Harmon, a Springtown resident, said she distrusts the vaccine and is relying on her Christian faith.

"I haven't even done any research on it, because in my mind, there's no way that you can 100% convince me that you can tell me what the effects are five years down the road if I take this vaccine today," said Harmon, a conservative. Research shows strong evidence that mRNA vaccines like the COVID-19 vaccines will not cause long-term harm.

Harmon said she does not trust government officials, regardless of party. She’ll only get her high school-aged son vaccinated for COVID-19 if it is required for school, although her children are vaccinated for other diseases, she said.

"If it's voluntary, and it stays voluntary, I will never take the vaccine," she said. "If it comes down to — I have to take it in order to keep my job — I will be in heavy prayer over what I need to do."

That pervasive distrust across such a broad demographic is particularly concerning for public health experts with the goal of reaching herd immunity.

"Anytime there are pockets or segments of the population that don't get vaccinated, it creates pockets of vulnerability," Huang said. "We want everyone to take this public health measure."

Epidemiologists estimate to reach herd immunity, between 70% and 90% of the population needs to be vaccinated. Because the vaccines aren’t approved for people under 16, that means virtually all adults in Texas.

"It’s not only Texas, but we look at some other states where a large proportion of them are Republicans," said Jamboor K. Vishwanatha, founding director of Texas Center for Health Disparities. "It’s a brutal fact — I mean it's going to affect all, because we will not be able to reach herd immunity. And with all of these new variants that may be coming, COVID may be with us for the long haul."

"COVID doesn’t discriminate between political affiliation," Vishwanatha added. "[But] unfortunately, it got politicized from the beginning."

Elected leaders like former President Donald Trump have at times downplayed the severity of the virus while denigrating scientists who urged for increased caution. Trump, who received the vaccine, did so off camera and did not make a strong public push for Americans to get vaccinated.

Tasha Philpot, a University of Texas at Austin political science professor, said Republican Gov. Greg Abbott’s messaging has been tepid in its encouragement of Texans getting vaccinated. Abbott received his first dose live on TV, but he also stresses in his public statements that the vaccines are "always voluntary," a nod to members of his party who reject the vaccine.

Philpot said Abbott’s decision to end most of the state’s COVID-19 restrictions earlier this month also sent a message to his party: The pandemic is over.

"It's a signaling game," she said. "I think if the signal had come from a credible source in their eyes, that we would be having a completely different discussion going on right now."

Many Republican officials are attempting to simultaneously appeal to two different crowds — with the Republican party nearly split down the middle on attitudes toward COVID-19 vaccines, she said.

"The last thing they want to do is upset their base," said Callaghan, the health policy management professor at Texas A&M. "If Abbott came out, full-throated, saying everyone really needs to do this so we can put the pandemic into decline and get back to normal and get Texas back to the way it should be — that might send a different signal to get more Republicans to vaccinate."

Dallas GOP chairperson Rodney Anderson stressed that the Republican Party isn’t a monolith — there are many who want the vaccine and there are a variety of reasons some might not want it. However, Anderson declined to share his personal views on the vaccine.

Anderson said most of his fellow party members that he’s talked to cite concerns that the vaccine was quickly developed. He said he thinks those who believe in conspiracy theories surrounding the vaccines or virus are in the minority.

But Anderson said GOP leaders like Abbott and others have done an admirable job encouraging Texans of all political leanings to be vaccinated.

Vaccine acceptance in communities of color

When the vaccine first began rolling out, headlines and polls emerged indicating that people of color, especially Black and Hispanic people, were more hesitant about getting vaccinated than other demographics.

However, over time those numbers have changed. According to the UT/Texas Tribune polls, Black Texans’ hesitancy dropped by 24 percentage points from November to February.

Among Hispanic Texans, attitudes toward the vaccine diverge based on political affiliation. About half of Hispanic Republicans said they were either against or unsure about getting a vaccine, compared with 34% of Hispanic Democrats who said the same.

Still, a higher percentage of Hispanic Republicans in Texas who were polled said they would get vaccinated than white Republicans.

The UT/TT Poll did not receive a large enough sample of Black Republican respondents to derive meaningful results.

"Some initial surveys indicated that there was vaccine hesitancy among people of color, but recent polls are showing that sentiment has largely decreased," Vishwanatha with the Texas Center for Health Disparities said, saying the problem is more about access.

The sentiment that Black and Hispanic people are less likely to want the vaccine is dangerous, Vishwanatha said, because of the disparities that persist. Black and Hispanic Texans already face disproportionately higher rates of dying or being hospitalized after being infected with COVID-19. And according to state data, they are being vaccinated at rates much lower than white people.

"By kind of pushing this narrative that ‘Black people don't want the vaccine anyway’ — it's kind of blurring over the fact that there's this racial divide in terms of the dissemination of the vaccine and who gets who's actually getting access to it," Philpot said.

Also notable is the difference in the root cause of why people of color are hesitant to get vaccinated compared to white Republicans.

"The huge difference between those two groups is this unique mistreatment of the Black community by the medical establishment, both historically and in modern times, that gives them additional pause about participating in a new vaccination program," Callaghan said. "And that's simply just not a reason why Republicans are hesitant to vaccinate against COVID-19."

Disclosure: University of Texas at Austin has been a financial supporter of The Texas Tribune, a nonprofit, nonpartisan news organization that is funded in part by donations from members, foundations and corporate sponsors. Financial supporters play no role in the Tribune's journalism. Find a complete list of them here.

"White Republicans are refusing to get the COVID-19 vaccine more than any other demographic group in Texas" was first published at https://www.texastribune.org/2021/03/23/covid-vaccine-hesitancy-white-republicans/ by The Texas Tribune. The Texas Tribune is proud to celebrate 10 years of exceptional journalism for an exceptional state.