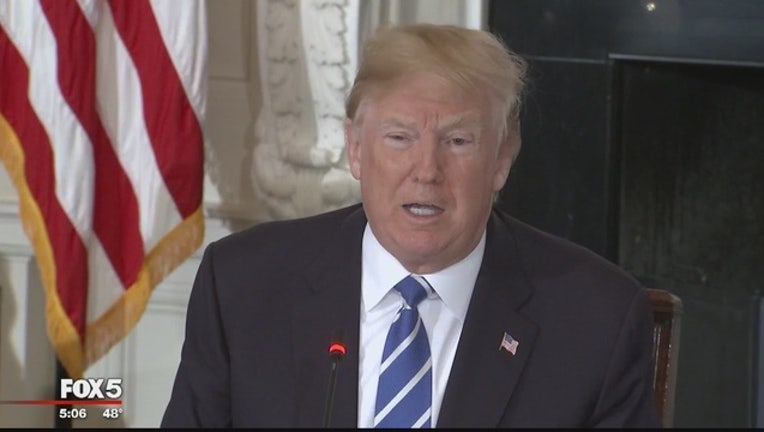 WASHINGTON (AP) - The White House said Tuesday that President Donald Trump's former bodyguard did nothing out of the ordinary when he took possession of the president's medical records last year, despite a claim by Trump's former doctor that the episode felt like a "raid."

Harold Bornstein, Trump's longtime personal doctor, told NBC News that Keith Schiller, the president's longtime bodyguard and former director of Oval Office operations, showed up at his office in February 2017 along with two other men to collect the records, leaving Bornstein feeling "raped, frightened and sad."

"As is standard operating procedure for a new president, the White House Medical Unit took possession of the president's medical records," she told reporters at a White House briefing.

As for Bornstein's description that it had had the feel of a raid, she said, "No, that is not my understanding."

The incident at Bornstein's office came two days after the doctor told The New York Times that Trump takes Propecia, a drug for enlarged prostates that is often prescribed to stimulate hair growth in men. Bornstein told the Times that he prescribed Trump drugs for rosacea and cholesterol as well.

Bornstein told NBC that Trump's longtime personal secretary called him after the story ran and said: "So you wanted to be the White House doctor? Forget it, you're out.'"

Bornstein said he wasn't given a form authorizing him to release Trump's records, but said Schiller and Garten took the originals and copies of Trump's charts and lab reports, including records filed under pseudonyms the office used.

Questions were raised about the legality of the seizure. Patients have a right to a copy of their medical records but the original physical record belongs to the doctor, said Dr. Matthew Wynia, director of the Center for Bioethics and Humanities at the University of Colorado.

"If a patient wants a copy, they can have a copy, but they don't get the original. Patients can also ask for their records to be transferred to a new doctor, but that also involves making copies (i.e., transferring the information), not literally packaging up the originals and sending them off," Wynia said in an email.

"Law enforcement can get copies of medical records, under some specific circumstances, but it doesn't seem like the people gathering these records were acting as law enforcement officers," Wynia said.

Bornstein did not respond to a request for comment Tuesday. Schiller departed the White House last fall and also could not be reached.

With his long flowing hair and large glasses, Bornstein became a colorful character in Trump's unlikely 2016 campaign for the presidency. In a letter released in December 2015, Bornstein wrote that Trump would "unequivocally" be the healthiest president in history and deemed the celebrity businessman's condition "astonishingly excellent."

He later said he wrote the note in five minutes while a limo sent by the candidate waited outside his office.

Bornstein's return to the headlines comes just days after Trump's White House physician, Dr. Ronny Jackson, withdrew his nomination to the head of the Department of Veterans Affairs after allegations of workplace misconduct. Jackson has denied the claims.