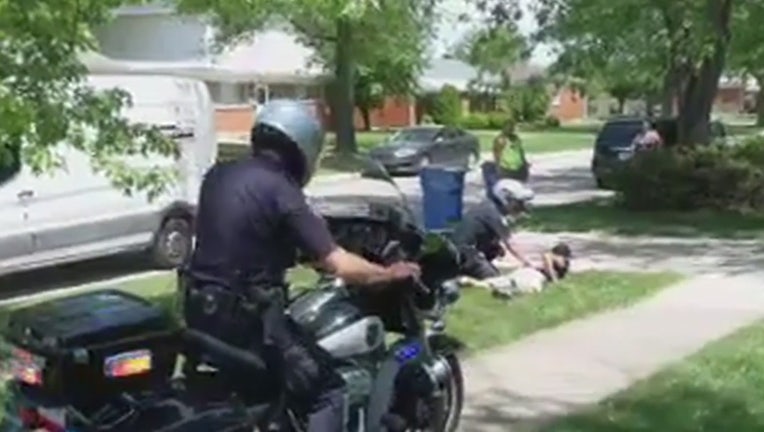 WARREN, Mich. - Following a confrontation between an Amazon delivery driver and a Warren police officer on Tuesday, the police commissioner is recommending felony charges of resisting arrest, failing to obey a lawful command, and failure to produce a driver's license.

Warren Police Commissioner Bill Dwyer said the case had been turned over to the department's internal affairs division and the officer-involved would be receiving due process. He also pleaded with citizens to avoid generalizing the incident as a "bad cop" scenario.

"It's critical the public understands to not put all police officers and paint them with a broad brush that they're bad officers," Dwyer said during a Wednesday morning press conference.

During the press conference, officers played dashcam footage from the incident yesterday. In it, an officer's squad car is seen driving toward a delivery truck parked facing a different direction. When he gets out, the officer walks over to the man standing on the lawn adjacent to the parked vehicle.

Police have released a nearly 8-minute long video of the arrest of an Amazon driver who police stopped after he parked on the wrong side of the street.

The man responds saying he's working and refers to the situation as "BS." After the officer requests to see the man's driver's license, the two continue to argue over the classification of the Amazon truck operating as a postal vehicle.

"You gonna give me a ticket for this Bullsh*t?" says the driver.

"I'm going to give you a whole lot more if you don't get your license out," replies the officer.

Dwyer said the officer requested the delivery man's license 11 times before the confrontation appears to escalate. As the officer reaches for the man's arms, the driver thrashes away, saying he'll get his license out. The officer continues to make the arrest.

At this point, while audio is still be recorded the two individuals are now offscreen from the dashcam footage. Neighbors hearing the commotion exit their houses and can be heard trying to calm the driver. He was eventually placed in the back of a squad car and another Amazon employee arrived and drove the delivery truck away.

Following a confrontation between a Black Amazon delivery driver and a white Warren police officer, the police commissioner is recommending felony charges of resisting arrest, failing to obey a lawful command, and failure to produce a driver's license.

Initial footage of the scene taken from a neighbor's phone captured the scene after the officer had already cuffed the driver. In interviews following the incident, many people in the neighborhood didn't understand why any escalation had occurred, describing the driver as "so polite" who had "offered to put it (the package) on the chair for her because it was so heavy."

“From when my sister walked in the house and then walked back out, the cop had him on the ground and cuffed and was calling for back-up," said witness Jim Michaels

The arrest comes at an incredibly tense time for law enforcement, who Dwyer described as operating under a microscope. Mass protests demonstrating against injustice sparked following the death of George Floyd, a black man who had his neck knelt on by a white police officer in Minneapolis.

"The public has to understand that law enforcement is a tough job," said Dwyer.

The traffic officer was called to the scene following a complaint that had been lodged against Amazon over its vehicles obstructing space on the road. Dwyer said it wasn't the first time they had heard problems from residents regarding Amazon vehicles.

Upon initial review of the video, Amazon spokesperson Deborah Bass said: “We see what others see in these videos, and it’s unacceptable. We expect a swift investigation and full accountability for those involved. Amazon will deploy all necessary resources to investigate the matter with our Delivery Service Provider, as well as to represent and support the driver."

Police are not talking Tuesday night, but neighbors who witnessed the incident, are.

Warren Mayor Jim Fouts also chimed in after seeing the user video, calling for the officer's firing. However, he deleted the post shortly after meeting with the police commissioner.

Dwyer said the driver "probably would have gotten a warning" if he had shown his driver's license when the officer asked. He declined to say if the officer should have stopped trying to arrest the man once he said he would take his license out.

The investigation is expected to take a few weeks.