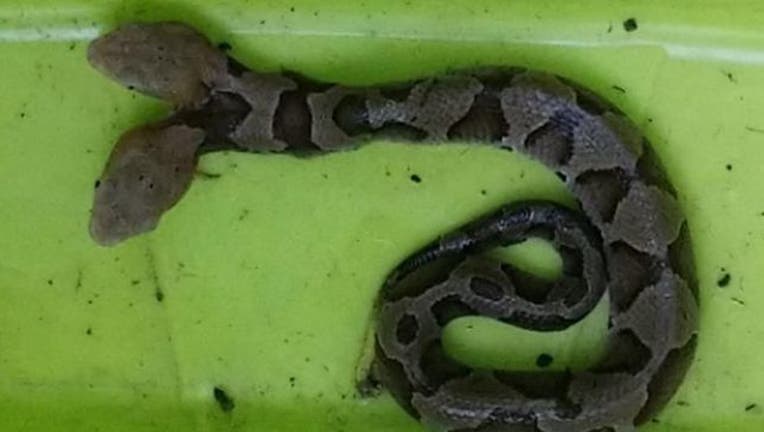 The snake was spotted in a Woodbridge, Virginia, resident’s backyard. (Virginia Wildlife Management and Control)

VIRGINIA (FOX News) -- Officials with the Virginia Wildlife Management and Control on Sunday took to Facebook to share “extremely rare photos” of a two-headed copperhead snake.

The snake was spotted in a Woodbridge, Va. resident’s backyard, according to the department. In addition to the photos, wildlife management officials also shared a video of the two-headed serpent twisting and wriggling inside a container.

“Check out these extremely rare photos of an actual 2-headed copperhead that was found in someone’s yard in Woodbridge...Cool, huh?” the department captioned the post, which had more than 1,000 shares and 600 reactions as of Friday afternoon.

While some social media users questioned the authenticity of the post, the department assured the photos and video were both very real, according to The Charlotte Observer.

“Absolutely not a fake! We assure you, it’s very real and was shedding its skin,” the department told the newspaper.

Two headed snakes are rare and typically do not survive for long in the wild, according to National Geographic.

Though “two heads are better than one" – as the saying goes – the same is not true for snakes. In fact, the rare genetic abnormality can hinder the snake’s ability to catch prey.

“Snakes operate a good deal by smell, and if one head catches the scent of prey on the other's head, it will attack and try to swallow the second head,” National Geographic reported, adding two-head snakes develop similarly to Siamese twins when an embryo does not properly split into two.