As police work becomes more dangerous and heavily scrutinized, many departments like the Dallas Police Department are having a tough time recruiting and retaining officers.

DALLAS - As police work becomes more dangerous and heavily scrutinized, many departments like the Dallas Police Department are having a tough time recruiting and retaining officers.

A criminal justice expo served as a chance for youth to interact with law enforcement officers on a personal level.

The fourth annual Criminal Justice Career Expo hosted by UNT Dallas attracted hundreds of high school and college students from across the state interested in law enforcement careers. Recruiters from local, state and federal agencies were eager to engage.

“This is where it starts about being educated about what we do every single day,” said Dallas County Sherriff’s Deputy Prentice Richmond.

Among the chatter, Deputy Richmond talked to a group of teens about community and race relations.

The serious conversation comes at a time when officers are under intense public scrutiny. 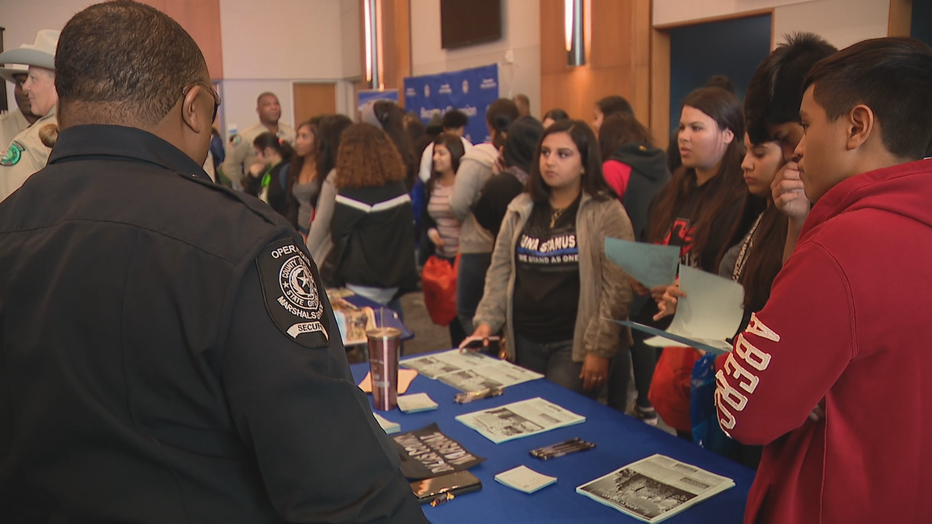 Fired police officer Amber Guyger who was convicted of murdering Botham Jean was one of the deadly encounters on the high schoolers' minds. They say many of their friends are weary of police.

“That's why we always now put a camera so that everything can be recorded so people can see from a different point of view,” said Michael Okwesa, an aspiring police officer.

Aaron Bartula is an associate professor of criminal justice at UNT Dallas. He says expos like these are a great way to change the negative view some people have about law enforcement. Many students leave wanting to be cops.

“As human beings, we see someone in a uniform and have a certain expectation,” Bartula said. “It’s important to have one on one conversations and understand them on a human level.”