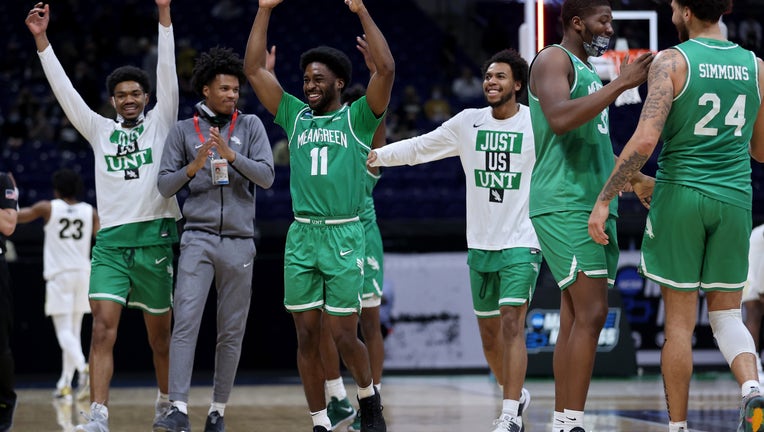 INDIANAPOLIS, INDIANA - MARCH 19: The North Texas Mean Green celebrate after beating the Purdue Boilermakers 78-69 in overtime in the first round game of the 2021 NCAA Men's Basketball Tournament at Lucas Oil Stadium on March 19, 2021 in Indianapolis

INDIANAPOLIS (AP) - To be, or not to be? For an underdog named Javion Hamlet and his group of scrapping North Texas teammates, that was an easy question.

Hamlet scored 24 points and Thomas Bell had 16, along with some game-changing defense in overtime, to lift the 13th-seeded Mean Green to a 78-69 win over No. 4 Purdue on Friday in the NCAA Tournament.

It marked the second teen-powered upset of the Big Ten on the opening day of the NCAA Tournament — this one coming hours after No. 15 Oral Roberts knocked out Ohio State.

What a great prize for Hamlet and Bell, a pair of seniors who led the Mean Green (18-9) to a regular-season Conference USA title last year but missed a chance at the tournament when the season was canceled by COVID-19.

They made sure things kept going this time.

Bell opened overtime with a 3, then altered two Purdue shots underneath to help the Mean Green turn the extra session into a laugh. North Texas scored the first 11 points.

Hamlet did most of his damage during a pair of sublime 8-0 personal runs in the second half, each of which stopped the Purdue (17-10) momentum in its tracks. The second was a twisting, spinning, dribbling display of mastery in the paint. It gave North Texas a nine-point lead with 7:45 left.

The Boilermakers scratched back and tied it at 61 on Trevion Williams' putback with 21 seconds left.

But overtime was no contest, and when it ended, Hamlet tossed the ball into the sparsely filled stands at Lucas Oil Stadium, raised his hands above his head and exited, stage right, to the locker room.

This marked the first tournament win in the history of North Texas, the team once known as the Eagles, that officially adopted "Mean Green" as its nickname in 2000. The moniker first became a thing when a fired-up cheerleader got creative at a football game in the late-’60s; it was then brought more into the fold when Hayden Fry, the folksy ballcoach who went on to greater fame at Iowa, came to the campus in Denton a few years later.

But there was no bigger name on this night than Hamlet.

He made all eight of his free throws and also had 11 rebounds and five assists. His 8-footer with 2:24 left in OT made it a seven-point game and turned the end into a free-throw-shooting contest.

Which North Texas won, too.