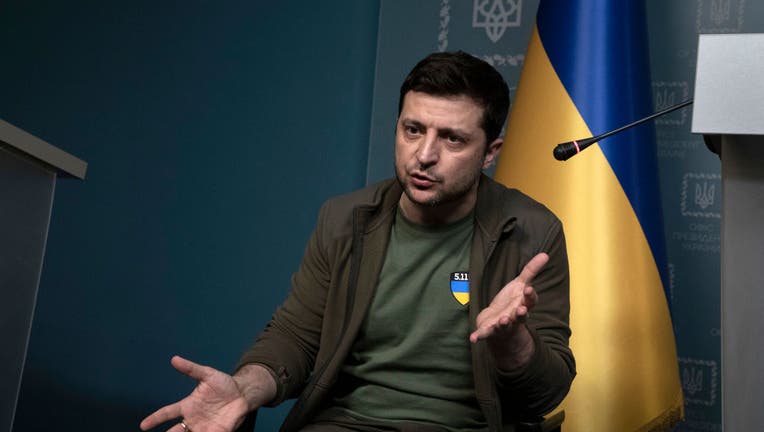 His address is scheduled to take place via video at 9 a.m. ET on March 16, 2022, with all members of Congress invited to attend at the U.S. Capitol.

Zelenskyy’s address comes as his country’s war with Russia enters its third week, and as Congress recently approved $13.6 billion in emergency military and humanitarian aid for the country. The war has forced more than 2.8 million people to flee Ukraine. Thousands of civilians and soldiers have been killed.

"The Congress, our country and the world are in awe of the people of Ukraine," said Pelosi and Schumer in an email to colleagues obtained by FOX Television Stations.

"We look forward to the privilege of welcoming President Zelenskyy’s address to the House and Senate and to convey our support to the people of Ukraine as they bravely defend democracy," the leaders said.

Zelenskyy spoke by video with House and Senate lawmakers earlier this month, delivering a desperate plea for more military aid. Details of what Zelenskyy might address Wednesday weren’t given. The event will be livestreamed for the public.

RELATED: Who is Volodymyr Zelenskyy?: How this comedian became a wartime president

Meanwhile, Russian troops were keeping up pressure on Ukraine's capital Monday and air raid sirens were heard across the besieged country overnight. Russia escalated its offensive on Sunday by shelling areas close to the Polish border, including an air base critical to Ukraine's defense.

A fourth round of talks was also underway Monday between Ukrainian and Russian officials via video conference to discuss getting aid to cities and towns under fire, among other issues. Ukrainian presidential aide Mykhailo Podolyak tweeted a photo of the two sides meeting by video link.

The talks will involve the same higher-level officials who met earlier in neighboring Belarus. Previous talks have not led to major breakthroughs or a solution for getting aid or evacuation convoys to Mariupol.

"Everyone is waiting for news. We will definitely report in the evening," Zelenskyy said Monday in a new video address.

Zelenskyy has called on Russian President Vladimir Putin to meet with him directly, a request that has gone unanswered by the Kremlin.

"No, Russia has its own potential to continue the operation, which, as we have said, is unfolding in accordance with the plan and will be completed on time and in full," Peskov told his daily conference call with reporters.