The attack on July 7, 2016 was the deadliest attack on law enforcement in the United States since the Sept. 11 attacks in 2001.

The attack on July 7, 2016 was the deadliest attack on law enforcement in the United States since the Sept. 11 attacks in 2001.

Roughly 800 people had gathered downtown for a peaceful protest that evening. Just before 9 p.m., a 25-year-old man with a military-style rifle began firing at police in the crowd.

According to police, the shooter targeted white officers and was determined to kill as many as possible. 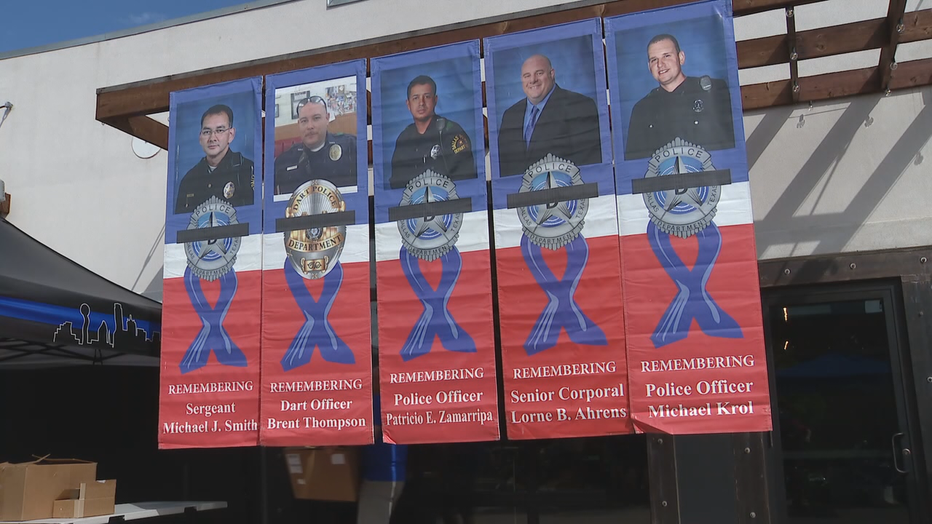 Nine other officers were shot but survived. Some protesters were also injured.

The gunman was later found hiding inside El Centro College and killed in an explosion during a standoff.

Only private tributes are planned for the fallen officers this year.

Four years have passed, but the memory is still fresh for Rick Zamarippa. His son, Patrick, was one of the five officers killed.

“Like it was just yesterday,” he said. “But as time goes, it still hurts and it’s still fresh.”

Rick says he remembers watching news of the shooting on TV and then rushing to get to his son in Dallas.

“I feel like Patrick was watching me all the way,” he recalled. “And as I got into Irving, I felt a strong sense he was gone.”

“These are trying times we’re in,” said Dallas Police Chief Renee Hall. “But I thank you for not letting them forget this community absolutely loves them.”

This year’s memorials for the fallen five was more subdued than in years past.

A group of citizens donating nearly 3,000 meals to thank Dallas police officers and staff and honor the day.

“We just believe the community and police will come together,” said Faith Johnson, the former Dallas County district attorney. “I believe that. I believe in us.”

“As the daughter of a slain officer, this is never easy,” Hall said. “And so the families of our fallen officers, thank you for continuing to acknowledge their legacy and the work they did.”

With recent anti-police protests, like the one the fallen officers were working the night they were killed, Rick acknowledges people have a right to demonstrate. But he also wants others to remember the officers’ sacrifice that night as they worked to protect and serve.

“If you have a chance remember this day, say a prayer for the officers because they're out protecting us,” he said.

Other events like a run for the blue 5k planned for this Saturday have been postponed due to coronavirus concerns. The group hosting that hopes to hold the event later this year.