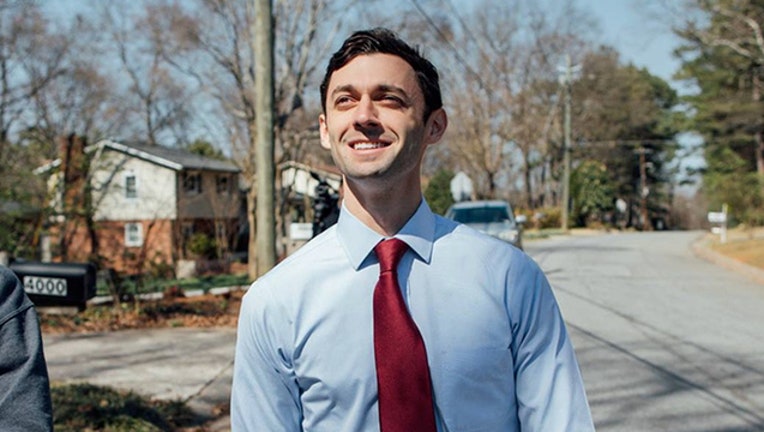 ALPHARETTA, Ga. (AP) - Republicans are pushing to prevent a major upset in a conservative Georgia congressional district where Democrats stoked by opposition to President Donald Trump have rallied behind a candidate who has raised a shocking amount of money for a special election.

Tuesday's primary lumps all 18 candidates -Republicans, Democrats and independents - on one ballot in a race that is testing both parties' strategies for the 2018 midterm elections with Trump in the White House. Democrats are expected to have a better shot at snagging the typically Republican seat than they did in last week's closer-than-expected GOP victory in a Kansas special House election.

Trump did not perform as well as other Republicans in the suburban Atlanta district, an affluent, well-educated swath filled with the kind of voters Democrats need if they hope to reclaim a House majority next year.

Republicans essentially concede that Democrat Jon Ossoff, a former congressional staffer, will lead Tuesday's voting. That leaves 11 Republican candidates hoping the 30-year-old investigative filmmaker fails to reach a majority. If he doesn't, Ossoff and the top GOP vote-getter would meet in a June 20 runoff.

Five Democrats will appear on the ballot, but Ossoff is the GOP's greatest threat. He raised more than $8.3 million, most from outside the district. Two independent candidates also are running. The winner will succeed Tom Price, who resigned to become Trump's health secretary.

Cedrick Gulley, a 25-year-old Georgia State University student from Sandy Springs, compared Ossoff to President Barack Obama and U.S. Sen. Cory Booker. He said both "make me feel like my generation is being heard."

He said Democrats were shocked into action by Trump's victory in November.

"I've always said that Democrats can be a little lazy, and I do believe since November there's an emergence of people fighting," Gulley said. "I think we have a chance to pull it out today."

The president took to Twitter on Tuesday morning, declaring Ossoff "would be a disaster in Congress."

In a statement Monday, Ossoff, who has used anti-Trump sentiments in his campaign, answered that Trump is "misinformed," but added that he's "glad the president is interested in the race."

However, Ossoff has tried to walk a line between liberals looking for a chance to oppose Trump and Republicans who couldn't support him in November. He has pledged to fight Trump when he "embarrasses" the country. But he tells voters in one ad, "I'll work with anybody in Washington who respects your tax dollars."

Both parties alike see the contest as an important barometer of Trump's standing ahead of 2018 midterm elections, when Democrats will try to regain control of Congress.

Karen Handel, Georgia's former secretary of state, has led the Republican field. Technology executive Bob Gray and two former state senators, Dan Moody and Judson Hill, are polling closest to Handel in a fight for the No. 2 spot.

The Republican scramble has been intense, with rivals accusing Handel of being a political opportunist and the conservative Club for Growth spending six figures on ads to defeat her.

National Republicans say any of the four competitive candidates could defeat Ossoff in a second round of voting. They predict voters would be energized in a Republican vs. Democrat scenario, making it harder for Ossoff to run above the fray as he has leading up to the primary.

Handel said Monday that she is confident enough Republicans will cast ballots to hold Ossoff short of a majority, setting up a runoff.

"Republican voters are not going to sit by and let this district go to a Democrat," Handel said. The district, which spans parts of Fulton, DeKalb and Cobb counties, has been in Republican hands since 1979 and was held for 20 years by former House Speaker Newt Gingrich.

Handel is among the Republican candidates trying to maintain some distance from Trump, rarely discussing him unless asked. Gray has instead tried to portray himself as a "willing partner" for the president.

Monte Jarnagin, a contractor from Roswell, stuffed his paint-speckled "Make America Great Again" hat into the back pocket of his jeans before walking into the church to vote for Gray. Jarnagin said Gray's professed support for Trump wasn't the only reason for his decision, but it didn't hurt.

"I felt like Gray was the least of a politician," he said. "Once people get in there, they get accustomed to their buddies and the power that comes with the job. They forget about what the middle class people, the hard-working, the lower class - whatever you want to call them - want."