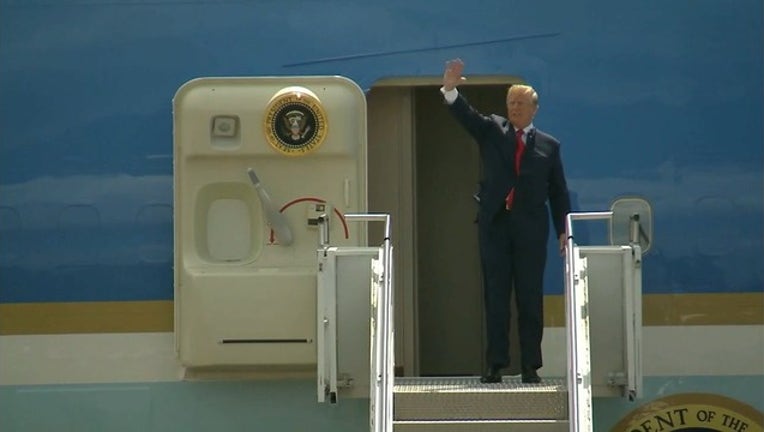 HOUSTON (AP) -- President Donald Trump began a trip to Texas on Thursday by meeting privately with families of some of the 10 people killed in a school shooting this month.

A White House spokesman said Trump was "moved" by the May 18 shooting at Santa Fe High School, which left eight students and two substitute teachers dead. A student faces capital murder charges in the attack.

"These events are very tragic, whenever they happen. And you know, the president wants to extend his condolences and talk about the issue of school safety," spokesman Raj Shah told Fox News Channel.

Trump, who at times has awkwardly embraced his role as the national comforter-in-chief, spent more than an hour with families and local leaders at a Coast Guard station just outside Houston. The White House did not immediately identify the people with whom Trump met or what they discussed. Reporters were not permitted to witness the meeting.

"He's the president of the United States, but he's also a father. He's also a husband, and he obviously understands what it's like, you know, to love someone and then lose someone," Shah said in the interview, adding that Trump approaches situations like these as a human being and a parent, not necessarily as a politician.

"I think he just, you know, he talks to families, he listens and he wants to learn," Shah said.

Texas Gov. Greg Abbott and U.S. Sen. Ted Cruz, both Republicans, greeted Trump on the tarmac after he stepped off of Air Force One at a Houston military base. Abbott joined Trump for the short ride in the presidential limousine to a Coast Guard hangar where the meeting was taking place. Trump was then scheduled to attend several political events in Houston and Dallas. A White House official did not immediately respond to requests for details about how much money was to be raised, and who was benefiting, from the fundraising events.

After 17 teachers and students were killed during a February shooting at a Parkland, Florida high school, Trump said he would work to improve school safety but has not called for new gun control legislation. He created a commission to review ways to make schools safer and named Education Secretary Betsy DeVos to chair it. The panel on Thursday was making its first field trip to a Baltimore-area elementary school.

Trump briefly strayed from gun rights dogma after the Parkland shooting, but quickly backpedaled. Abbott, a Republican and a staunch gun-rights supporter, has called for schools to have more armed personnel and said they should put greater focus on spotting student mental health problems. He's proposed a few small restrictions on guns since the shooting.

Classes at Santa Fe High School resumed Tuesday for the first time since the shooting. Investigators say student Dimitrios Pagourtzis, 17, carried out the attack with a shotgun and pistol that belonged to his father. Pagourtzis has been charged with capital murder.

As the Parkland students became vocal advocates for gun control, embracing their public positions as few school survivors had before, Trump quickly became a rallying cry for their anger. In Trump's visit to Florida in the wake of the shooting, aides kept him clear of the school, which could have been the site of protests, and he instead met with a few victims at a local hospital and paid tribute to first responders at the nearby sheriff's office.

To this point, there has not been a similar outcry for restrictions on firearms from the students and survivors in deep-red Texas.

Displaying empathy does not often come naturally to Trump, who has been criticized for appearing unfeeling in times of tragedy, including when he attacked a mayor in Puerto Rico in the aftermath of a deadly hurricane and fought with a Gold Star military family.

But there have been moments when Trump has displayed a softer side. On Wednesday, he reciprocated a hug from a 8-year-old boy with muscular dystrophy and attended a White House event marking legislation to give patients the right to try experimental treatments

That same day, White House press secretary Sarah Huckabee Sanders grew emotional when, during the daily press briefing, she was asked by a young student journalist about what steps the administration was taking to safeguard schools.

Before Thursday, Trump was most recently in the Lone Star State on May 4, when he attended the annual NRA convention and pledged that the attendees' Second Amendment rights "will never ever be under siege as long as I am your president."

He also touted the administration's "aggressive strategy on community safety" and mentioned armed guards, armed teachers, mental health and metal detectors but did not mention assault rifles likes the one used in Parkland.