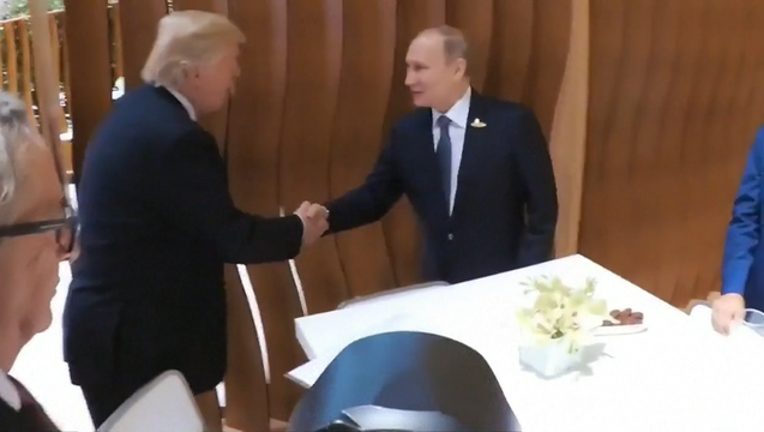 HAMBURG, Germany (AP) - At long last face to face, President Donald Trump and Russian President Vladimir Putin voiced confidence Friday that their historic first meeting would pave the way for a positive trajectory for their two countries. If thornier issues like election meddling came up in their two-hours-plus meeting, they discussed them only in private.

In characteristically confident fashion, Trump said he and the Russian leader were holding "very, very good talks" as journalists were briefly allowed in to witness part of their meeting in Germany. Seated with an American flag behind him, Trump appeared informal and relaxed and said it was "an honor" to be with Putin.

"We look forward to a lot of very positive things happening for Russia, for the United States and for everybody concerned," Trump said.

The White House said in advance that 35 minutes had been allotted for the meeting. But it extended well beyond that, clocking in at 2 hours and 16 minutes, the State Department said.

Trump offered no details about what issues he and the Russian leader had discussed, describing them only as "various things." Putin was similarly vague, telling reporters through a translator that they were discussing international problems and bilateral issues.

Still, Putin described the fact that they were meeting as a positive sign in itself, and he said he hoped the meeting would "yield positive results."

"Phone conversations are never enough definitely," Putin said. "If you want to have a positive outcome in bilaterals and be able to resolve most international policy issues, that will really need personal meetings."

Then the leaders shook hands firmly but briefly before reporters were escorted out of the room. Trump did not respond to shouted questions about whether they would discuss Russia's meddling in the U.S. election - a topic lawmakers in Washington have been demanding that Trump raise directly.

Both kept their composure amid the commotion of cameras clicking and journalists lobbying questions as anxious aides moved about nearby. The U.S. leader's son, Donald Trump Jr., took to Twitter to say the noise from the cameras made it difficult to even hear the two leaders' words.

"How many pictures do you need of the same scene?" he said.

The heavily anticipated meeting is being closely scrutinized for signs of how friendly a rapport Trump and Putin will have. Trump's predecessor, President Barack Obama, had notoriously strained ties to Putin, and Trump has expressed an interest in a better U.S.-Russia relationship.

But deep skepticism about Russia in the U.S. and ongoing investigations into whether Trump's campaign coordinated with Moscow during last year's election have made a U.S.-Russia detente politically risky for Trump.

Putin, slightly hunched in his chair, rubbed his fingers together as he listened to Trump address reporters during the public portion of their meeting. Also in the meeting: Secretary of State Rex Tillerson and Russian Foreign Minister Sergey Lavrov.

In a prelude to their formal sit-down, Trump and Putin shook hands and exchanged broad grins earlier Friday in a brief exchange caught on video as a leaders' retreat got under way in Hamburg. A brief video clip showed Trump outstretching his hand to Putin as officials gathered around a table, then patting Putin's elbow as both men smiled. In another clip, Trump casually patted Putin on the back as they stood side by side.

Video of the brief exchange was posted to Facebook by the German Cabinet. It was the first known in-person interaction between the two men.

Trump alluded to the campaign controversy as he started the day with a jab at his vanquished Democratic opponent, Hillary Clinton. He wrote on Twitter that "everyone here is talking" about her campaign chairman's "disgraceful" response after the FBI discovered Democratic Party computers were hacked - a breach later blamed on Russia.

Outside the summit site, anti-globalization protesters were causing problems for first lady Melania Trump, who was kept from joining other leaders' spouses for their own program of events. Mrs. Trump's office said local police hadn't cleared her to leave the government guest house where she and Trump were staying because of the protests, in which demonstrators set dozens of cars ablaze.

In the lead-up to the meeting, Trump used a speech in Warsaw on Thursday to voice a list of grievances about Russia. He urged Putin's government to "cease its destabilizing activities in Ukraine and elsewhere and its support for hostile regimes - including Syria and Iran - and to instead join the community of responsible nations in our fight against common enemies and in defense of civilization itself."

But much of the focus - both in Washington and Moscow - will be on whether Trump broaches the issue of Russia's meddling in the election. Putin, a former Russian intelligence agent, is known to come to high-profile meetings like this well-prepared.

In a news conference before he flew to Germany, Trump again refused to unequivocally accept the conclusion by multiple U.S. intelligence agencies that Russia interfered to try to help Trump win last November. Trump said it could have been Russia, but that other countries could have meddled, too.

"Nobody really knows for sure," Trump said.

The list of issues facing the two countries ranges from Syria to Iran to Ukraine, and now North Korea, following Pyongyang's test this week of a missile capable of striking the U.S.

Russia wants the U.S. to return two compounds in New York and Maryland that were shuttered by the Obama administration as punishment for election meddling. It also wants the U.S. to ease Ukraine-related sanctions. The U.S. seeks a resumption of adoptions of Russian children by American parents, an end to harassment of U.S. diplomats and other measures.

In Washington, Trump has been under intense pressure from both parties to confront Putin over the election interference. Several senior Democratic U.S. senators served notice in a letter Thursday that Trump would be in "severe dereliction" of his presidential duty if he fails to make clear that Russia's interference in U.S. democracy will not be tolerated.

"The upcoming elections cannot be a playground for President Putin," said Senate Minority Leader Chuck Schumer and others, including the top Democrats on the Intelligence, Armed Services, and Foreign Relations committees.

And Rep. Adam Kinzinger, an Illinois Republican and House Foreign Affairs Committee member, said this week that he will "raise holy hell" if Trump goes soft on Putin.

The Putin tete-a-tete was Trump's highest-profile meeting while at his first G-20 summit, but not the only with a nation whose relationship with his administration has been rocky.

Pena Nieto of Mexico had been scheduled to visit the White House shortly after Trump took office, but scrapped the trip at the last minute to protest Trump's insistence that Mexico pay for the border wall he has vowed to build to deter illegal immigration. Pena Nieto insists Mexico won't pay.

Asked by a reporter as their meeting started whether he still wanted Mexico to pay, Trump said: "Absolutely."

The Putin meeting came midway through a hectic, four-day European visit for Trump, who addressed thousands of Poles in an outdoor speech in Warsaw, Poland, on Thursday. He met in Germany with Chancellor Angela Merkel, the summit host, and had dinner with two Asian allies - Japanese Prime Minister Shinzo Abe and South Korean President Moon Jae-in - to discuss North Korea's aggression.

AP Writer Josh Lederman in Washington contributed to this report.