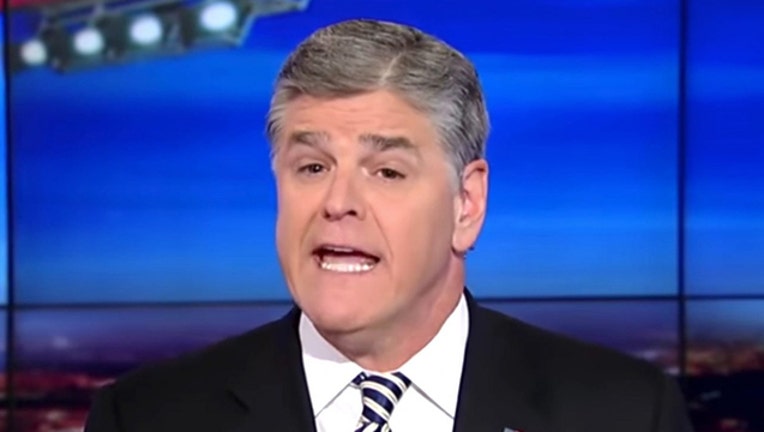 NEW YORK (AP) - A legal fight over what should happen to records the FBI seized from President Donald Trump's personal attorney took a surprise twist Monday when the lawyer, Michael Cohen, was forced to reveal a secret - that he had also done legal work for Fox News host Sean Hannity.

The disclosure came as attorneys for Cohen and Trump tried to persuade a New York judge to delay prosecutors from examining records and electronic devices seized in the raids on the grounds that many of them are protected by attorney-client privilege.

U.S. District Judge Kimba Wood said in hearings Friday and Monday that if Cohen wanted the court to declare that some of his files were protected because of attorney confidentiality rules, he would have to divulge the names of the clients he's worked with since the 2016 election.

One was, of course, Trump himself. Another was Elliot Broidy, a Trump fundraiser who resigned from the Republican National Committee on Friday after it was revealed that he paid $1.6 million to a Playboy Playmate with whom he had an extramarital affair. The Playmate became pregnant and elected to have an abortion.

With Cohen by their side on Monday, lawyers initially resisted revealing the name of the third client for privacy reasons, saying it would be embarrassing for the client.

But Wood pressed on.

"I understand he doesn't want his name out there, but that's not enough under the law," she said.

When the name was announced, there were gasps and some laughter in a courtroom packed with journalists. A few of them raced from the courtroom.

Cohen's lawyers did not detail the type of legal work he did for Hannity. Cohen, in a light blue tie and dark suit, spent most of the hearing looking forward, his hands folded.

On his radio show, Hannity said Cohen was never involved in any matter between him and any third party.

"Michael never represented me in any matter," Hannity said. "I never retained him in any traditional sense. I never received an invoice. I never paid a legal fee. I had brief discussions with him about legal questions where I wanted his input and perspective."

Hannity, an outspoken supporter of Trump, has been a fierce critic of special counsel Robert Mueller, who is looking into Russian interference in the 2016 U.S. presidential election.

The last to enter court, she was among the first to leave. While in court, she smiled several times as she observed the proceedings from a folding chair near the back of the room. Outside afterward, she said Cohen has acted like he's above the law and that she and her lawyer are committed to making sure everyone learns the truth.

The April 9 raid on Cohen sought information on a variety of matters, including a $130,000 payment made to Daniels, who alleges she had sex with a married Trump in 2006.

At issue is exactly who gets to look at Cohen's seized documents and devices before they are turned over to prosecutors. Attorneys for Cohen say they want first crack. Trump's lawyers say they also want some form of prior review. Another option is to set up a "special master" who would vet the material to determine what is protected and what isn't; that is the Cohen team's second choice.

Prosecutors, who say they raided Cohen's office, home and hotel room as part of an undisclosed crime related to his personal business dealings, prefer the ordinary procedure of reviewing the documents with a panel of prosecutors unrelated to the investigation - a so-called "taint team."

Lawyers for Cohen filed papers Monday saying investigators "took everything" during the raids, including more than a dozen electronic devices. They said that prosecutors had already intercepted emails from Cohen and executed the search warrants only after discovering that there were no emails between Trump and Cohen.

One of Trump's lawyers, Joanna Hendon, asked the judge to block prosecutors from studying material seized in the raid until Cohen and the president have both had a chance to review those materials and argue which are subject to the "sacred" attorney-client privilege.

"The seized materials relating to the president must be reviewed by the only person who is truly motivated to ensure that the privilege is properly invoked and applied: the privilege-holder himself, the President," Hendon wrote in court papers filed Sunday.

Wood adjourned the hearing Monday, rejecting Hendon's request for a temporary restraining order on the grounds that it was too early for such an objection. As a first step, the judge said the government should put the documents in a searchable database to determine which should come under review. Prosecutors said they expected they could determine by midweek how fast they can accomplish that.

Trump, who was in Florida on Monday, said all lawyers are now "deflated and concerned" by the FBI raid on Cohen.

"Attorney Client privilege is now a thing of the past," he tweeted Sunday. "I have many (too many!) lawyers and they are probably wondering when their offices, and even homes, are going to be raided with everything, including their phones and computers, taken. All lawyers are deflated and concerned!"