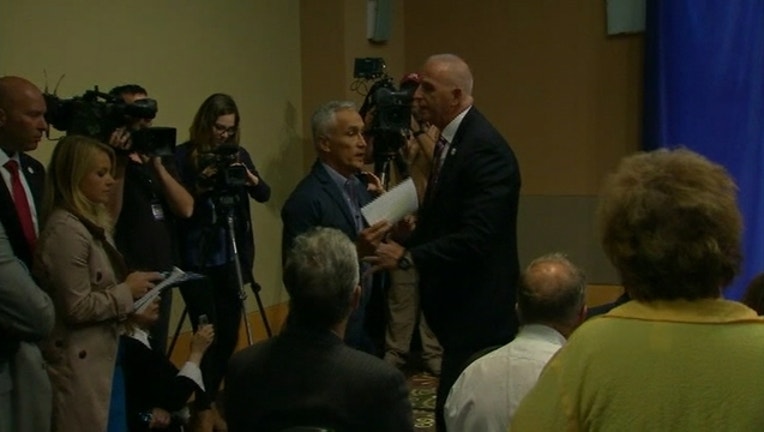 DUBUQUE, Iowa (AP) — Republican presidential candidate Donald Trump engaged in a prolonged confrontation with the anchor of the nation's leading Spanish-language network during a news conference Tuesday, first having the well-known news personality removed before allowing him back in.

Jorge Ramos, the Miami-based anchor for Univision, stood up and began to ask Trump about his immigration proposal, which includes ending automatic citizenship for infants born in the United States to parents in the country illegally.

As Ramos began to speak, Trump interrupted him, saying he hadn't called on Ramos before repeatedly telling him to "sit down" and then saying, "Go back to Univision."

As one of Trump's security detail approached Ramos, the anchor continued to speak, saying, "You cannot deport 11 million people." Ramos was referring to Trump's proposal to deport all people in the country illegally before allowing some of them to return.

As he was taken from the room, Ramos said, "You cannot build a 1,900-mile wall," another proposal in Trump's plan.

The billionaire businessman's immigration proposal has sparked intense debate within the 2016 Republican field. Several candidates, including former Gov. Jeb Bush, have called it "unrealistic," and Wisconsin Gov. Scott Walker bobbled his answer on whether he supports ending birthright citizenship.

Ramos was later allowed back into the news conference. Trump greeted him politely, though they quickly resumed their argument, interrupting each other during an extended back-and-forth.

"Your immigration plan, it is full of empty promises," Ramos began. "You cannot deny citizenship to children born in this country."

"Why do you say that?" Trump replied. "Some of the great legal scholars agree that's not true."

Citizenship for infants born in the United States is guaranteed by the 14th Amendment, and changing that would require amending the Constitution.

A Washington think tank that favors immigration restrictions, the Center for Immigration Studies, estimates that about 40,000 babies annually are born to parents who enter the United States specifically to have a child, and that most of those parents enter the country legally.

A Pew Research Center study in 2010 estimated 340,000 babies born in 2008 were the offspring of people in the country illegally.

During the five-minute exchange, Ramos claimed that 40 percent of people in the country illegally enter through airports, not over the Mexican border. "I don't believe that. I don't believe it," Trump responded.

A 2006 report by the Pew Hispanic Center found that as much as 45 percent of the people in the U.S. illegally entered with legal visas but overstayed them.

Trump said he did not believe that a majority of immigrants in the U.S. illegally were criminals, or in the country to commit crimes. "Most of them are good people," he said. But he described recent cases where people had been killed by assailants later determined to be in the country illegally.

Finally, Trump reminded Ramos that he was suing Univision, which dropped Trump's Miss Universe pageant after he described Mexican immigrants in the U.S. illegally as "criminals" and "rapists."

Isaac Lee, chief executive officer of Univision, responded to the confrontation with a written comment: "We'd love for Mr. Trump to sit down for an in-depth interview with Jorge to talk about the specifics of his proposals."

Trump also said he would offer a foreign policy proposal within the next month. But he hinted at some of his thoughts during a free-wheeling rally in the Dubuque convention auditorium that followed the news conference.

"We protect Germany for no money. We protect South Korea for no money," Trump said during the rally — which, despite the crowd size, was more subdued than one he hosted last month in Oskaloosa, Iowa.

But Trump scored his biggest ovation of the evening by reminding his audience he does not have to seek the favor of donors, as his rivals do.