Flyers defenseman Ivan Provorov cited his Russian Orthodox religion as the reason he did not participate in pregame warmups when the team wore Pride-themed jerseys.

PHILADELPHIA - Flyers defenseman Ivan Provorov cited his Russian Orthodox religion as the reason he did not participate in pregame warmups when the team wore Pride-themed jerseys and used sticks wrapped in rainbow Pride tape.

The 26-year-old Provorov didn't take part in the pregame skate with his teammates before their game against Anaheim on Tuesday night, when the Flyers celebrated their annual Pride night in celebration and support of the LGBTQ community. He played nearly 23 minutes in Philadelphia's 5-2 victory.

"I respect everybody's choices," Provorov said after the game. "My choice is to stay true to myself and my religion. That's all I'm going to say."

Provorov declined to answer follow-up questions about his decision.

Flyers coach John Tortorella said Provorov "was true to himself and to his religion."

"It’s one thing I respect about Provy, he’s always true to himself," Tortorella said.

Russian Orthodox Patriarch Kirill, the leader of Russia’s dominant religious group, sent a strong signal last March justifying his country’s invasion of Ukraine — describing the conflict as part of a struggle against sin and pressure from liberal foreigners to hold "gay parades" as the price of admission to their ranks.

Even though Russian President Vladimir Putin justified his invasion of Ukraine in part as a defense of the Moscow-oriented Orthodox church, leaders of both Ukrainian Orthodox factions are fiercely denouncing the Russian invasion, as is Ukraine’s significant Catholic minority.

The jerseys and sticks were being auctioned off by the Flyers following the game, with proceeds going to the team's charity and its efforts to grow the game of hockey in diverse communities.

The Flyers also hosted a pregame skate for local LGBTQ youth. Flyers players James van Riemsdyk and Scott Laughton have been staunch supporters of the community and launched a program in support of local LGBTQ youth in the greater Philadelphia area. 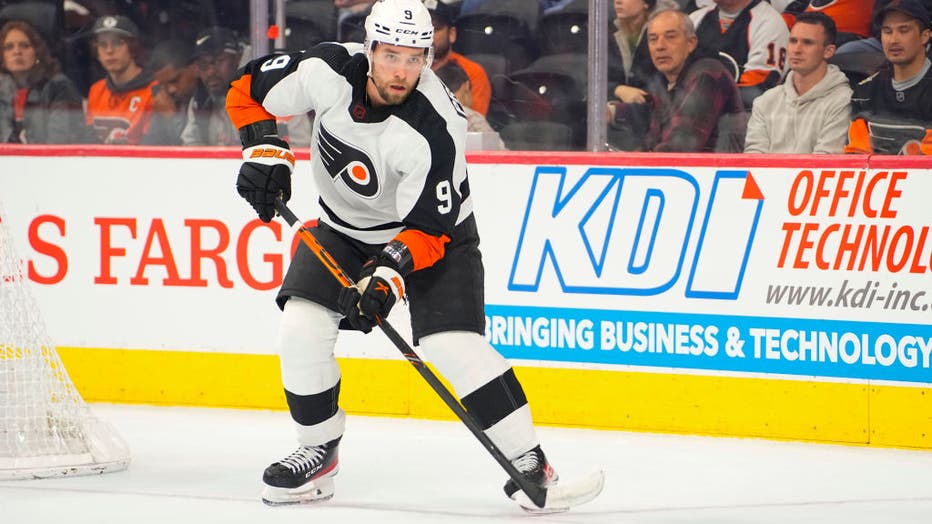 PHILADELPHIA, PA - JANUARY 05: Philadelphia Flyers Defenseman Ivan Provorov (9) looks to pass the puck during the third period of the National Hockey League game between the Arizona Coyotes and Philadelphia Flyers on January 5, 2022, at the Wells Far

Laughton and van Riemsdyk met after the game with about 50 people in the LGBTQ community. Laughton said overall the Flyers had a "great, great night that brings a lot of awareness."

Laughton said there would be more conversations ahead with Provorov, who moved from Russia to the United States as a teenager. He signed a six-year, $40.5 million contract before the 2019 season and won the Barry Ashbee Trophy as the Flyers’ outstanding defenseman in his rookie season, the youngest Philadelphia player to receive the honor.

"I don't hold anything against anyone," Laughton said. "It's nothing like that. It was an awesome night and I'm very happy we got a win on a night like this."

All-Star forward Kevin Hayes, who had a hat trick in the game, said "it's not for me to answer" when asked how he felt about Provorov's decision.

"The Philadelphia Flyers organization is committed to inclusivity and is proud to support the LGBTQ+ community," the team said in a statement after the game. "Many of our players are active in their support of local LGBTQ+ organizations, and we were proud to host our annual Pride Night again this year. The Flyers will continue to be strong advocates for inclusivity and the LGBTQ+ community."

The NHL also champions the You Can Play Project, which aims to ensure equality, respect and safety for all athletes, without regard to sexual orientation. The NHL has never had an openly gay active player.

You Can Play co-founder Brian Kitts said in a statement on Twitter that "religion and support for fans and teammates aren't mutually exclusive."

"The Flyers have been among the first and most consistent teams in sports supporting LGBTQ+ inclusion," Kitts said. "There is still work to be done to change hearts and minds and the You Can Play Team looks forward to continuing our efforts."