SKYFOX captures images of the People's Convoy, as truckers from across the U.S. arrive in the D.C. region Sunday to protest COVID-19 mandates.

WASHINGTON - Trucker convoys from across the U.S. arrived in the D.C. region Sunday. The group called the People's Convoy circled the Capital Beltway throughout the day.

SKYFOX was over the scene of the rally for much of the day. Supporters of the convoy were spotted lining the interstate and along overpasses in several areas of the Beltway as the convoys drove through. Many people also reported hearing the blowing horns from the convoys throughout the D.C. region.

Thousands of truckers began traveling this week toward the nation's capital as part of the Convoy. They stopped in Hagerstown, Maryland Friday, and stayed there for 2 nights before bringing their protest closer to D.C. on Sunday.

Hundreds of people from the D.C. area are lined up along the roads to support them.

Thousands of truckers began traveling this week toward the nation's capital as part of the American Trucker's Freedom Convoy.

"This to me, is the first time in my life that I’ve ever stood up for anything, and it means that much to me." said Adria Lewis, one of the organizers of the People's Convoy.

Hagerstown is the meeting point for several convoys who are protesting COVID-19 mandates and restrictions, plus illegal immigration and other issues.

Initially the groups had planned to drive toward D.C. during the day Saturday, but organizers decided to stay and rally in Hagerstown Saturday night.

Another convoy is also planning a rally at the Dominion Speedway in Woodford, Virginia Sunday and Monday.

Several convoys have joined forces with the People's Convoy that made the cross-country journey from California. Their message, according to Lewis, is: "Nobody should have to be forced to do something they’re not willing, that they don’t feel is right for them."

"We’re making a stand for the citizens of our country to stand up for our constitution. The leaders in our country work for us, we don’t work for them," said Al Wallace, who made the trip from Denver, Colorado.

"We all have one purpose and its just that we want to keep our freedoms, and we don’t want them taken away," added Craig Wroblewski, a trucker from Northville, Michigan.

"These guys stood up, coming from all over the country and standing up for their freedom and I stand behind them 100 percent," said Charles Timbrook, a Martinsburg, West Virginia native who cheered for the truckers as they arrived.

Organizers say they don't have an exact number of people taking part in the convoy, but they tell us the line to get in to the speedway was between 40 to 70 miles long. Some truckers who made the trek, would like to possibly meet with congressional members to discuss policy changes.

Local law enforcement in the D.C. area tells FOX 5 they are watching the trucker convoy closely. And government officials also say they are in close communication with each other ahead of the rally's arrival in the capital.

"We are 100 percent peaceful and that we have no ill will toward anybody," Lewis said. "We want the mandates to end, we want our freedom back, and we want a choice." 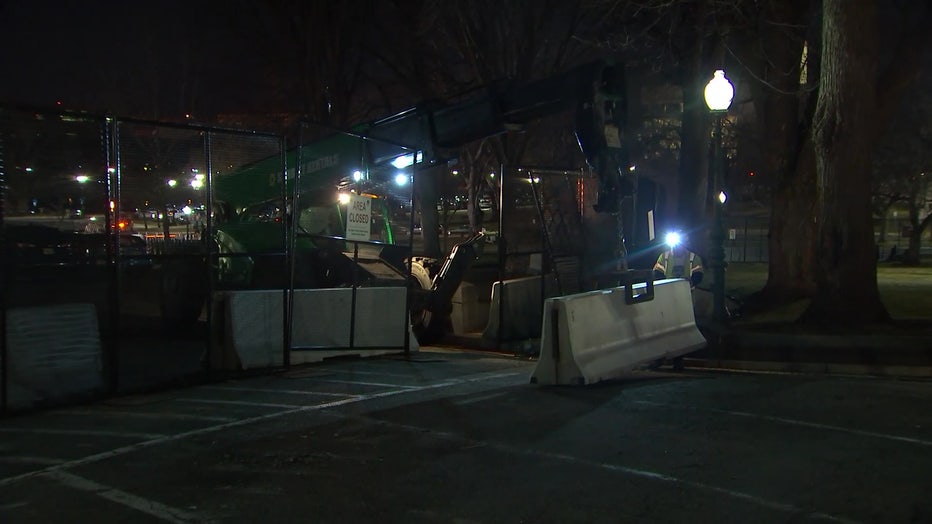 Fencing that was erected around the U.S. Capitol ahead of President Joe Biden's State of the Union address in preparation for potential trucker convoy disruptions was removed earlier this week.

Fencing around US Capitol removed; more trucker convoys could be headed to DC

Fencing that was erected around the U.S. Capitol ahead of President Joe Biden's State of the Union address has been removed.

Virginia Gov. Glenn Youngkin and Maryland Gov. Larry Hogan have been receiving briefings on the convoys. Chris Rodriguez, Director of the Homeland Security and Emergency Management Agency in D.C., says the District has been preparing for several weeks.

Last month, a trucking company owner organized a convoy from Pennsylvania hoping to cause gridlock and disruptions on the Capital Beltway. Bob Bolus spoke with FOX 5 and said he hoped to squeeze traffic along I-495 like a "giant boa constrictor." Several vehicles took part in the convoy, but few disruptions were reported.

The U.S. protests come after thousands of truckers in Canada rallied and clashed with authorities for weeks in the country's capital earlier this year over COVID mandates.